'Monstrous and Shocking in the Extreme' 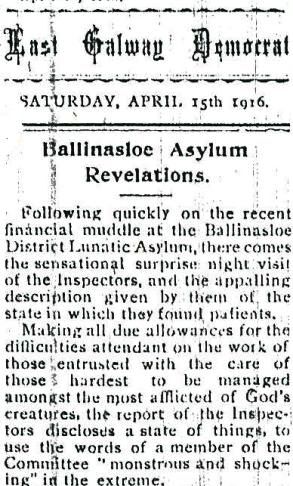 ‘Following quickly on the recent financial muddle at the Ballinasloe District Lunatic Asylum, there comes the sensational surprise night visit of the Inspectors, and the appalling description given by them of the state in which they found patients.

Making due allowances for the difficulties attendant on the work entrusted with the care of the hardest to be managed amongst the most afflicted of God’s creatures, the report of the Inspectors discloses a stste of things, to use the words of a member of the Committee “monstrous and shocking” in the extreme.

Were such a report made by any but the Inspectors, and were not its truth regettingly admitted by the Acting R.M.S., it would seem incredible that such things were possible in a fully equipped Lunatic Asylum blatantly boastful of its management.

No words of ours can add to the picture disclosed in the extracts from the report which we publish, and which the Committee in its wisdom (?) denied the Press facilities for giving to the public in extenso.

By such a line of action the members of the Committee make themselves, to a certin extent, particeps criminis, in the business, as whoever may be responsible, see in it, too tender regard for their susceptibilities, and it is this that make it more difficult to effect the necessary reformation.

The publication of the report in full could in no way prejudice any person concerned, in the inquiry asked for, as facts being admitted there only remains the question of responsibility.

That responsibility is both immediate and remote.’

‘Over 200 people travelled from Ballinasloe to Athlone on Sunday to witness the Croke Cup Championships in the Hurling and Football Finals. The day was very fine, and favoured the day’s outing. Dublin defeated Clare in the Hurling, and Roscommon in the Football. In the Sport’s Grounds, where the matches were played, there were about 4,000 spectators present.’ 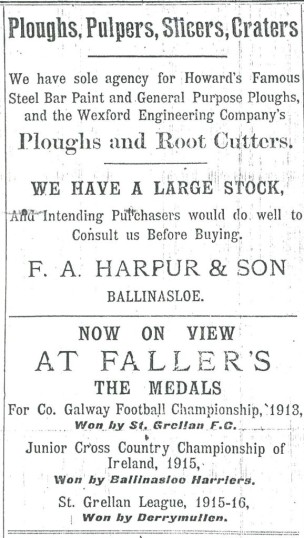 ‘Messrs Jameson will visit the Town Hall on Easter Sunday and Easter Monday nights with their celebrated perfection pictures. No better can be shown, and the oppourtunity offered should be availed of by all.’

‘Will Ladies kindly note that Miss Oliver, Society Street, is agent and resident Corsetiere for the celebrated Spirella Corsets. Every Corset is made from measurement to fit the individual client. Miss Oliver will have pleasure in showing the sample and giving expert advise.

The Spirella Corset holds a certificate of merit from the London Institute of Hygiene, and the Golden Palm from the Institute of Paris (The first and only awards issued to a corset).’