From the Papers 04 March 1916: News from the Connaught Rangers 5th Battalion 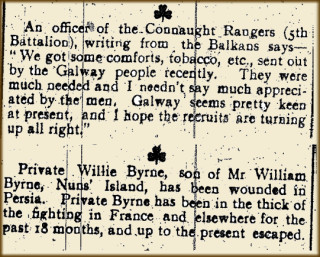 ‘An office of the Connaught Rangers (5th Battalion), writing from the Balkans says – “We got some comforts, tobacco, etc., sent out by the Galway people recently.  They were much needed and I needn’t say much appreciated by the men.  Galway seems pretty keen at present, and I hope the recruits are turning up all right.”

‘Private Willie Byrne, son of Mr. William Byrne, Nuns’ Island, has been wounded in Persia.  Private Byrne has been in the thick of the fighting in France and elsewhere for the past 18 months and up to the present escaped.’

‘Mr Wm. Byrne, Nun’s Island, got a letter from his son, Private Willie Byrne, 1st Batt. Connaught Rangers, who has been wounded at the Persian Gulf, and is now in hospital at Bareilly, India.  He left Franceon the 11th December and arrived on the 19th of January, and two days later went into terribly severe action in which he was wounded, a bullet going through his thigh.  Private Byrne says that his regiment advanced one thousand yards in the open.  Many officers and non-commissioned officers were killed and wounded.  Pte. Byrne says that the Turks are clean good fighters, but the Arabs are a savage and cruel lot.’