What the Papers Said 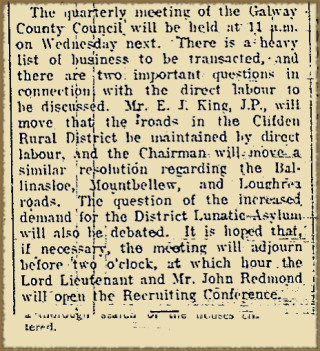 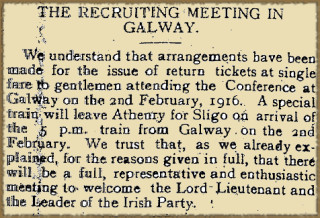 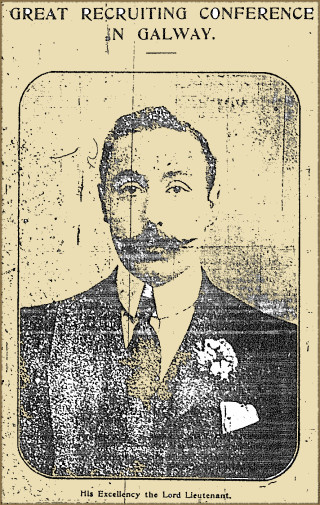 ‘The quarterly meeting of the Galway County Council will be held at 11 a.m. on Wednesday next.  There is a heavy list of business to be transacted, and there are two important questions in connection with the direct labour to be discussed.  Mr. E. J. King, J.P., will move that roads in the Clifden Rural District be maintained by direct labour, and the Chairman will move a similar resolution regarding the Ballinasloe, Mountbellew, and Loughrea roads.  The question of the increased demand for the District Lunatic Asylum will also be debated.  It is hoped that if necessary, the meeting will adjourn before two o’clock, at which hour the Lord Lieutenant and Mr. John Redmond will open the Recruiting Conference.’

The Recruiting Meeting in Galway

We understand that arrangements have been made for the issue of return tickets at single fare to gentlemen attending the Conference at Galway on the 2nd February, 1916.  A special train will leave Athenry for Sligo on arrival of the 5 p.m. train from Galway on the 2nd February.  We trust that, as we already explained, for the reasons given in full, that there will be a full, representative and enthusiastic meeting to welcome the Lord Lieutenant and the Leader of the Irish Party.’

Extract from the Galway Express 29 January 1916

The postponed recruiting conference will be held at Galway on Wednesday next, and will be attended by his Excellency the Lord Lieutenant and Mr. John E Redmond, M.P., who will travel to Galway by special train, arriving about 12.30. The distinguished visitors will be met at the station by Mr. Mart McDonagh, J.P., Chairman, and the other members of the Urban Council, as also by the prominent gentlemen of the city and county. The local corps of the National Volunteers will form a guard of honour to his Excellency and Mr. Redmond, and the St. Patrick’s brass and reed band, and the band of the Salthill Industrial School will play appropriate selections, including the National Anthem and ‘God Save Ireland’.

Mr Martin McDongah has invited a number of prominent gentlemen to meet his Excellency and Mr. Redmond at lunch at the Railway Hotel at 1 o’clock, and at about 2.15 the visitors will drive to the Town Hall, where addresses will be presented from the Galway Urban Council, Harbour Commissioners, Co. Council, University College, and the Volunteers. The Conference will take place at 2.30 p.m. About three thousand invitations have been issued to the prominent and leading men of Connaught, and special trains will be run into the city from various centres including one from Dublin.