From the Papers 02 January 1916: Armenian Genocide 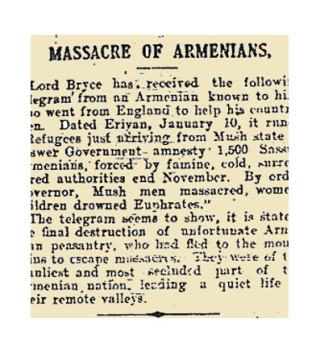 Advertisement from the Tuam Herald published on the 2nd January 1916 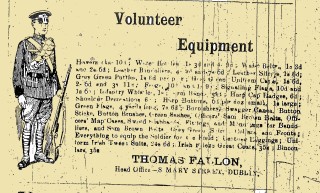 Advertisement from the Tuam Herald published on the 2nd January 1916

Lord Byrce has received the following telegram from an Armenian known to him, who went to England to help his countrymen.  Dated Erivan, January 10, it runs: “Refugees just arriving from Mush state in answer Government amnest 1,500 Sassun Armenians, forced by famine, cold, surrendered authorities end November.  By order Governor, Mush men massacred, women, children drowned Euphrates.”  The telegram seems to show, it is stated, the final destruction of unfortunate Armenian peasantry, who had fled to the mountains to escape massacre.  They were of the manliest and most secluded part of the Armenian nation, leading a quiet life in their remote valleys.’