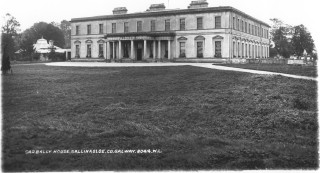 No criminal cases at present

‘Ballinasloe Q. Sessions were opened on Wednesday by Judge Doyle, K.C.  There being no criminal cases to be heard, his Honor was presented with white gloves, circumstances preventing a similar compliment being paid for the past 20 years.

This indicates the present peaceable condition of the district, while the same state of things prevail in great part throughout Ireland, which is a matter for hearty congratulation.’

‘Lord and Lady Clancarty, who were to spend most of their time in Ireland, having given up their London residence, appear to realise that there is still only “one bright spot.”  Garbally Court, which is to be their new residence, is well out of the range of Zepps and seaplanes, for it is situated on the borders of Roscommon and Galway, where the Trenches, a Huguenot family, settled in 1631.

Immediately outside the gates is Ballinasloe, famous for its October fair of horses, cattle and sheep – the largest of its kind in the Kingdom.  Garbally’s owner derives portion of his income from the fair, as George I, gave the family the tolls, and those belong today to Lord Clancarty.  The mansion, a big two-storied structure, built in 1810 to replace a mansion destroyed by fare, contains some splendid rooms, several well over 40 feet long the dining-room being 46.

In the centre of the house was a court yard, but this is roofed in and forms a picture gallery and ballroom.

There is a fine park of 1,000 acres with two lakes abounding with fish and wildfowl, and a famous yew walk- a broad gravelled path half a mile long with enormously high hedges. At one end is a monument seventy feet high, marking the site of old Garbally Court.

On St. Patrick’s Day a large and enthusiastic meeting was held in Clonbur to promote the Irish language movement in that and surrounding districts.  At 11 o’clock mass an eloquent Irish sermon on St. Patrick was preached by Rev. Fr. Mellotte, P.P. and subsequently the Gaelic league meeting was held in the Square.  The principal speakers were Colm O’Gaora, and Sean Seoighe, G.L.T.’

A further meeting was held on Sunday afternoon in the Mechanics’ Institute to take measures to revive the old Galway Coursing Club.  It was decided to advertise for hares to be let out at Ballybane, Ballybrit and Castlegar; and a Committee was appointed to enlist the support of the farmers of those districts, with a view to their preservation – (the palatable and nutritive properties of hare-soup not withstanding).  It was also decided to ask the support of prominent local gentlemen.

Another meeting will be held next Sunday week, at the the same hour and venue.’