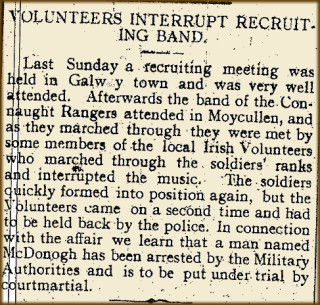 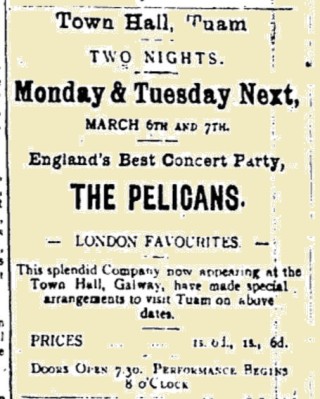 Advertisement from the Tuam Herald 04 March 1916 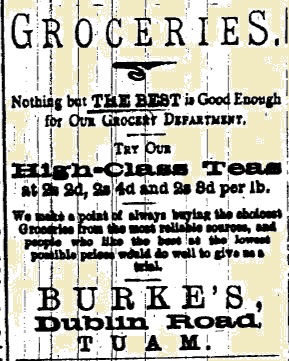 Advertisement from the Tuam Herald 04 March 1916

Last Sunday a recruiting meeting was held in Galway town and was very well attended.  Afterwards the band of the Connaught Rangers attended in Moycullen, and as they marched through they were met by some members of the local Irish Volunteers who marched through the soldiers ranks and interrupted the music.  The soldiers quickly formed into position again, but the Volunteers came on a second time and had to be held back by police.  In connection with the affair we learn that a man named McDonough has been arrested by the Military Authorities and is to be put under trial by courtmartial.’

‘A very remarkable family record had been handed in to the Express office concerning a real fighting family named Walsh, who come from the Co. Clare.  Mr Martin Walsh is captain of the Rugby football team at St. Mary’s College, Galway, and has 23 first cousins serving in the army.  Fifteen hold commissions as lieutenants, two as captains and the remainder are non-commissioned officers and privates in Australian regiments.  Captain Walsh, one of the family, has the remarkable record of being one of the first recruiting officers in Australia, and in the bush added the remarkable number of 27,000 men to the Colonial troops.  All the 23 are named Walsh, and with one exception none of these have been in Ireland since the war commenced.’

A big fire broke out at Gurteen, Dunmore, on Tuesday night week in the grocery and provision establishment of Mr Patrick Finnegan.  Early on Tuesday evening, a chimney took fire and in a few minutes was extinguished.  Mr. Finnegan and his family retired to bed at the usual hour at their private house, leaving the shop in a completely safe and regular condition.  Between two and three o’clock, Mr. Finnegan was awakened by the collapse of the roof of the shop and on rushing out, found the place in flames.  Being removed from any centre that could the requisite aid to extinguish the flames, the proprietor adopted every means at his disposal without avail, and in a compatively short time the whole building was gutted and the stock-in-trade, comprising large supplies of groceries, provisions and hardware, destroyed.  The house was a two-storey building, and was valued at £600, and the stock-in-trade at £1,000.

With Mr. Finnegan, who is an extremely popular gentleman, deep sympathy is felt in his great loss and dislocation of this business.  The property was covered by insurance.’

The enterprising management of this up-to-date theatre have again succeeded in securing for Sunday night only Mr. Mike Nono, who will give further selections from his extensive repertoire. They have also secured Miss Una Worth (soprano), of the Pelican Company, whose marvellous vocal power have earned for her the genuine and appropriate title of the “Lancashire Nightingale”. Together with this wonder talent is the usual excellent picture programme, and seldom has Galway ever been favoured with such a combination of talent. On Monday the principal item on the programme is a fine modern war dram entitled, “The Road to Calais”. Thursday’s star picture is a fine drama of everyday life in the big cities of America, called, “Under the Gaslight”.