You are here: Home>Galway Commemorating>2016 Blog Archive>The Irish at Gallipoli

The Irish at Gallipoli

What the papers said. 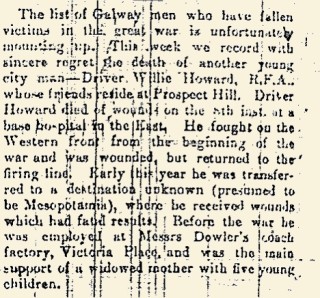 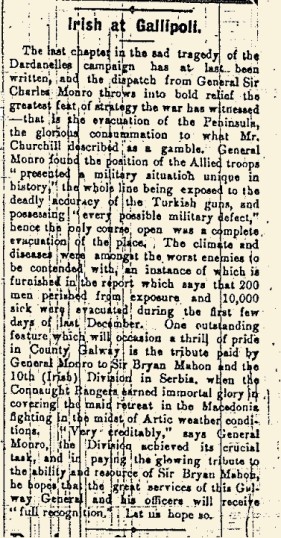 ‘If telephonic communication could be arranged between Inishbofin and Clifden it would be an immense advantage and would greatly facilitate doctor and nurse in cases of emergency.  The cost would not be excessive and the matter deserves consideration.’

‘The list of Galway men who have fallen victims in the great war is unfortunately mounting up.  This week we record with sincere regret the death of another young city man – Driver Willie Howard, R.F.A. whose friends reside at Prospect Hill.  Driver Howard died of wounds on the 8th inst. at a base hospital in the East.  He fought on the Western front from the beginning of the war and was wounded, but returned to the firing line.  Early this year he was transferred to a destination unknown (presumed to be Mesopotamia), where he received wounds which had fatal results.  Before the war he was employed at Messrs Dowler’s coach factory, Victoria Place, and was the main support of a widowed mother with five young children.’

The last chapter of the Dardanelles campaign has at last been written, and the dispatch from General Sir Charles Monro throws into bold relief the greatest feat of strategy the war has witnessed – that is the evacuation of the Peninsula, the glorious consummation to what Mr. Churchill described as a gamble …

One outstanding feature which will occasion a thrill of pride in County Galway is the tribute paid by General Monro to Sir Bryan Mahon and the 10th (Irish) Division in Serbia, when the Connaught Rangers earned immortal glory in covering the main retreat in the Macedonia fighting in the midst of Arctic weather conditions.  “Very creditably,” says General Monro, the Division achieved its crucial task, and in paying the glowing tribute to the ability and resource of Sir Bryan Mahon, he hopes that the great service of this Galway General and his officers will receive “full recognition.”  Let us hope so.’