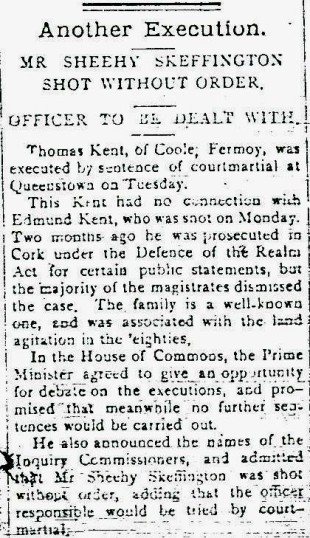 ‘Mr J. O’Reilly, Manual Instructor in the Ballinalsoe Technical School, was arrested at the Ballinasloe station on Thursday as he left the train by Constable Ryan. Mr O’Reilly was in Dublin during the Rising, and afterwards proceeded to Woodlawn, where he carried on his classes for three days. He is suspected of being a Sinn Feiner by the authorities.

He is to be handed over to the military authorities.

This is the first arrest in Ballinalsoe.

Mr Gaffney, Professor in St. Joseph’s College, was arrested on Thursday evening. Mr O’Reilly and himself were conveyed to Athenry by motor, under a strong escort of armed police. There were two motor cars used for their conveyance, and both were handcuffed. They were handed over to the military authorities in Athenry.

The police searched a number of houses in Ballinasloe on Friday, where men professing the Sinn Fein policy work and reside. There were no arrests made after the search.’