Battle at Carnmore and man-o'-war in the bay 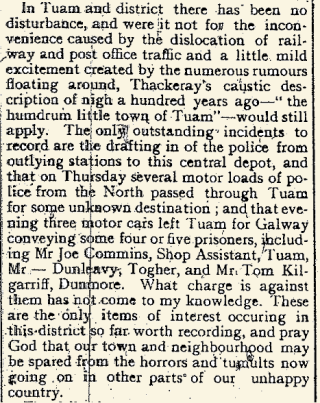 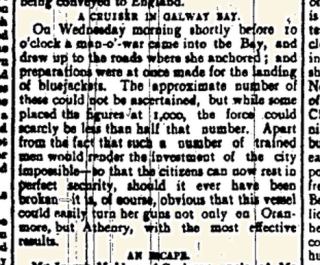 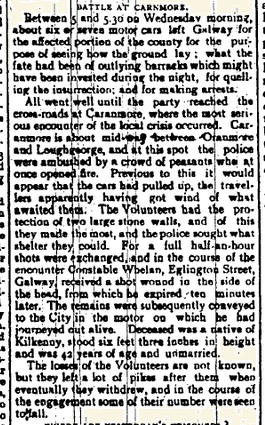 … In Tuam and district there has been no disturbance, and were it not for the inconvenience caused by the dislocation of railway and post office traffic and a little mild excitement created by the numerous rumours floating around, Thackeray’s caustic description of nigh a hundred years ago – “the humdrum little town of Town” – would still apply.  The only outstanding incidents to record are the drafting in of the police from outlying stations to this central depot, and that on Thursday several motor loads of police passed through Tuam for some unknown destination; and that evening three motor cars left Tuam for Galway conveying some four or five prisoners, including Mr Joe Commins, Shop Assistant, Tuam, Mr Dunleavy, Togher and Mr Tom Kilgarriff, Dunmore.  What charge is against them has not come to my knowledge.  These are the only items of interest occuring in this district so far worth recording, and pray God that our town and neighbourhood may be spared from the horrors and tumults now going on in other parts of our unhappy country.’

A Cruiser in Galway Bay

On Wednesday morning shortly before 10 o’clock a man-o-war came into the Bay, and drew up to the roads where she anchored; and preparations were at once made for the landing of bluejackets. The approximate number of these could not be ascertained, but while some placed the figures at 1,000, the force could scarcely be less than half that number. Apart from the fact that such a number of trained men would render the investment of the city impossible- so that citizens can now rest in perfect security, should it ever have been broken. It is of course, obvious that this vessel could easily turn her guns not only on Oranmore, but Athenry, with most effective results.

Between 5 and 5.30 on Wednesday morning, about six or seven motor cars left Galway for the affected portion of the county for the purpose of seeing how the ground lay; what the fate had been of outlying barracks which might have been invaded during the night, for quelling the insurrection; and for making arrests.

All went well until the party reached the cross-roads at Caranmore, where the most serious encounter of the local crisis occurred. Caranmore is about mid-west between Oranmore and Loughgeorge, and at this spot the police were ambushed by a crowd of peasants who at once opened fire. Previous to this it would appear that the cars had pulled up, the travellers apparently having got wind of what awaited them. The Volunteers had the protection of two large stone walls, and of this they made the most, and the police sought what shelter they could. For a full half-an-hour shots were exchanged, and in the course of the encounter Constable Whelan, Eglington Street, Galway, received a shot wound in the side of the head, from which he expired ten minutes later. The remains were subsequently conveyed to the City in the motor on which he had journeyed out alive. Deceased was a native of Kilkenny, stood six feet three inches in height and was 42 years of age and unmarried.

The losses of the Volunteers are not known, but they left a lot of pikes after them when eventually they withdrew, and in the course of the engagement some of their number were seen to fall.

Mr Joseph Meldon, of Coolarne, uncle of Mr Jack Meldon, of Galway, had a most exciting experience, being captured by the Volunteers and escaping again the same day. On Tuesday as he motored from Coolarne, his motor car was seized and he himself was placed under arrest by the Volunteers – ‘decent fellows’ he terms them. Apparently their vigilance was not to close, for Mr Meldon managed to get quietly away and joined the police at Oranmore, coming to Galway with the relief detachment by special train on Tuesday.