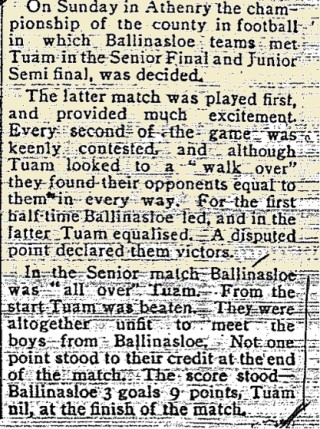 ‘On Sunday in Athenry the championship of the county in football in which Ballinasloe teams met Tuam in the Senior Final and Junior Semi final, was decided.  The latter match was played first, and provided much excitement.  Every second of the game was keenly contested, and although Tuam looked to a “walk over” they found their opponents equal to them in every way.  For the first half time Ballinasloe led, and in the latter Tuam equalised.  A disputed point declared them victors.

In the Senior match Ballinsloe was “all over” Tuam.  From the start Tuam was beaten.  They were altogether unfit  to met the boys from Ballinasloe.  Not one point stood to their credit at the end of the match.  The score stood – Ballinalsoe 3 goals 9 points, Tuam nil, at finish of the match.’

‘On Tuesday there was a violent thunderstorm, and a great downpour of rain convenient to the town.  In the Asylum there was a cow killed by lightning; a sheep killed, and a cock of hay burned at Culliagh.’