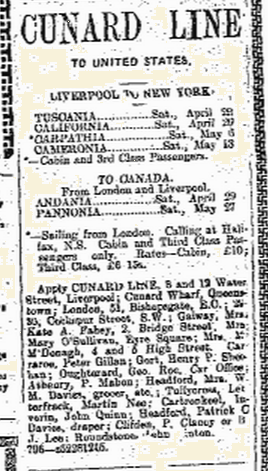 “Ireland has chosen this path.”  I would pause for a moment further to ask people to think a little on this; suppose she had, as well she might with her history, and as some of her sons both at home and in America have wanted to do, chosen a different alternative?  Ireland’s strength as an international factor is not to be measured only by her political position at the heart of the Empire, or her strategic position in the Atlantic, or by the size of her population at home, but also by the millions of her kin throughout the Empire and America, whose deep and enduring sentiment to her, linked as it is with their distinguished and never – tarnished loyalty to the new lands of their adoptions is one of the striking facts of modern history.  Germany understands this factor, and keeps on making unnecessary and ingenious efforts, especially in the United States, to make her account with it.  For Ireland to have chosen the opposite alternative, or to be flung into it by the fortune of war, would, in my opinion, be for her an unmixed calamity, the worst in her history.  Her fate as a possession of Germany, as Germany’s western fortress naval base, Helgoland of the Atlantic, would, from the nature of the case, be far worse than that of Prussia, Poland, Schleswig and Alsace for the last forty years.  (From Mr Redmond’s introduction to “The Irish at the Front” by Michael MacDonagh).