You are here: Home>Galway Commemorating>2016 Blog Archive>From the Paper 26 February 1916: The condition of crime in Galway and time for seed planting.

From the Paper 26 February 1916: The condition of crime in Galway and time for seed planting. 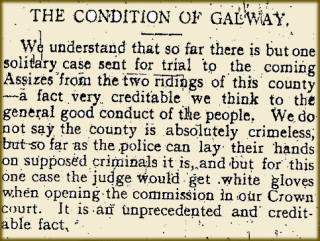 ‘THE CONDITION OF GALWAY

We understand that so far there is but one solitary case sent to trial to the coming Assizes from the two ridings of this county – a fact very creditable we think to the general good conduct of the people.  We do not say the county is absolutely crimeless, but so far as the police can lay their hands on supposed criminals it is, and but for this one case the judge would get white gloves when opening the commission in our Crown court.  It is an unprecedented and creditable fact.’

Teams representing Barna and Spiddal met in Moycullen on Sunday last in the first round of the West Galway Junior Hurling league.  Despite the inclemency of the previous week, Sunday was exceptionally fine, and the ground, under the circumstances, was all that could be desired.  A large crowd gathered to witness the match, which was rather exciting at the start, but, suddenly, Barna got on the offensive and forced the play in Spiddal’s back line which gave way hopelessly before the repeated onslaughts of the Barna fowards.  Time and again the Spiddal full back pucked off the ball, only to hear it whissing by him again the next moment, with the result that Barna have several goals to their credit when the whistle blew for half time.

On resumption Spiddal endeavoured to force matters, but the Barna backs were more than equal to the demands made on them, and returned the leather with lightning rapidity.  Towards the end the game was for the most part one-sided, Spiddal finding it impossible to intercept the Barna forwards whose dash and combination were excellent for a junior team.  As was expected Barna won easily, the score at full time being:

Though all the Barna players gave a good account of themselves, we might mention especially P.J. Donnelly and W.McDonagh, who baffled all opposition in the forward line, while P. Folan and W. Hickey played exceedingly well in centre field and M.J. Codyre played a good game in the back line.

Mr. P.O’Droighneain, Moycullen, had charge of the whistle, and gave entire satisfaction to both teams.

The Board of Guardians of the above Union will, at their meeting to be held on Saturday, the 4th day of March, 1916, receive and consider tenders for the supply from the 1st of April, 1916, to the 31st March, 1916, of coffins in three sizes, for the indoor and outdoor poor.  The timer used for making the coffins must be one inch thick and finished by staining, and the lids be me “screw-down” lids.  Any further particulars can be obtained from the Master of the Workhouse.

Tenders, marked “tender for Coffins” should be lodged in the tender box at the workhouse before 12 o’clock noon, on the above date.

The lowest or any tender not necessarily accepted

Secretary of the Union’