You are here: Home>Galway Commemorating>2016 Blog Archive>From the Papers 18 March 1916: The first lamb of the year and bee keeping in Roundstone

From the Papers 18 March 1916: The first lamb of the year and bee keeping in Roundstone 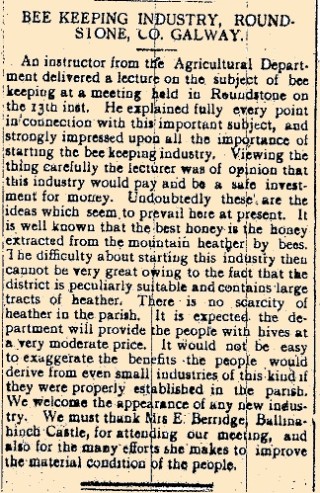 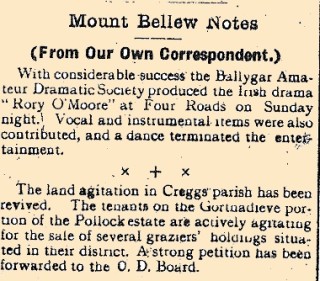 An instructor from the Agricultural Department delivered a lecture on the subject of bee keeping at a meeting held in Roundstone on the 13th inst.  He explained fully every point in connection with this important subject, and strongly impressed upon all the importance of starting the bee keeping industry.  Viewing the thing carefully the lecturer was of opinion that this industry would pay and be a safe investment for money.  Undoubtedly these are the ideas which seem to prevail here at present.  It is well known that the best honey is the honey extracted from the mountain heather by bees.  The difficulty of starting this industry then cannot be very great owing to the fact that the district is peculiarly suitable and contains large tracts of heather.  There is no scarcity of heather in the parish.  It is expected the department will provide the people with hives at a very moderate price.  It would not be easy to exaggerate the benefits the people would derive from even small industries of this kind if they were properly established in the parish.  We welcome the appearance of any new industry.  We must thank Mrs E. Berridge, Ballinahinch Castle, for attending our meeting, and also for the many efforts she makes to improve the material condition of the people.’

Owing to the pressure on our space last week we omitted to notice an event for the announcement of which the Galway public have been prepared by a long series of similar achievements in previous years, vis., that to Mr. John Gallagher, William Street, has once more fallen the distinction of having had the first lamb of 1916 for sale, and also the first salmon.  With those poetic harbingers of the spring, with which no less than with a thriving business, the name of Mr. Gallagher is associated, to remind us that we are emerging from the tunnel of winter, all may take heart of grace once more.’

‘With considerable success the Ballygar Amateur Dramatic Society produced the Irish drama “Rory O’Moore” at the Four Roads on Sunday night.  Vocal and instrumental items were also contributed, and a dance terminated the entertainemnet.

The land agitation in Creggs parish has been revived.  The tenants on the Gortnadieve portion of the Pollock estate are actively agitiating for the sale of several graziers’ holdings situated in their district.  A strong petition has been forwarded to the O. D. Board.’