'Only one case of Epidemic Disease reported during the month' 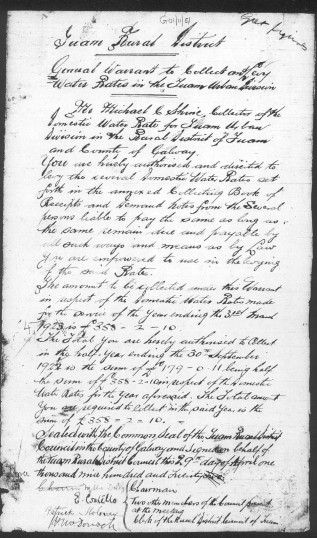 Resolution passed by the Portumna Rural District Council, condemning the action of the authorities in shooting the innocent people without any form of trial during the recent disturbance in Dublin, and further for depriving them of the youth an manhood of Ireland by deportation, and whose sympathies were heartily in accord with the wishes of the Government as far as recruiting is concerned.  That a Committee of the whole Board be appointed to collect funds for the dependents of those noble Irishmen who were shot during the disturbance.’

‘Specification from Mr. Newell, Engineer, for channel paved to be formed in front of the labourers cottages at Halfstraddle to take away surface water from flooding the entrance yard to their cottages, which he estimated would cost from £20 to £25.

Advertise for a Contractor tenders to be considered on the 15th July.’

‘Dr Golding, Medical Officer of Health, Headford dispensary district reported that there is an overflow of liquid manure outside Thomas Lee’s house in Headford which finds its way into Miss Kyne’s premises, and he recommended that it be drained into public street sewer (this can be done when work on sewer is being done).

Mr Burke, Dairy Inspector reported that he inspected 66 Dairies and Cowsheds during the month and found them clean.  He submitted his report book.’

There was only one case of Epidemic Disease reported during the month, a case of Diphtheria.  I recommend that the public wells in charge of the Council which are annually cleaned be done soon.  The walls surrounding the wells should be limewashed & the grass & weeds about them cut.”