You are here: Home>Galway Commemorating>2016 Blog Archive>From the Papers 12 January 1916: News of a Shocking Arrest and a Profile of a Connaught Soldier

From the Papers 12 January 1916: News of a Shocking Arrest and a Profile of a Connaught Soldier 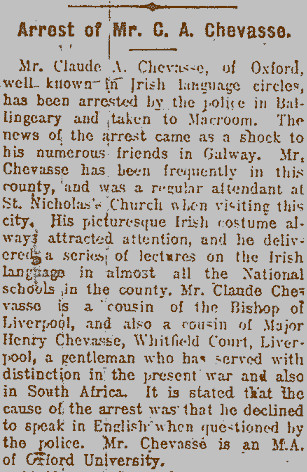 Image from the Galway Express 12 January 1916 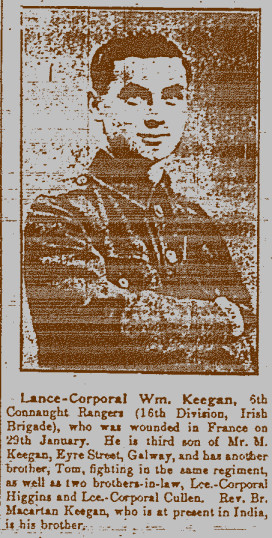 Arrest of Mr. C. A. Chevasse

Mr. Claude A. Chevasse, of Oxford, well known in Irish languagecircles, has been arrested by the police in Ballingeary and taken to Macroom.  The news of the arrest came as a shock to his numerous friends in Galway.  Mr. Chevasse has been frequently in the county, and was a regular attendant at St. Nicholas’s Church when visiting this city.  His picturesque Irish costume always attracted attention, and he delivered a series of lectures on the Irish language in almost all the National schools in county.  Mr. Claude Chevasse is a cousin of the Bishop of Liverpool, and also a cousin of Mayor Henry Chevasse, Whitfield Court, Liverpool, a gentleman who has served with distinction in the present war and also in South Africa.  It is stated that the cause of the arrest was that he declined to speak in English when questioned by the police.  Mr. Chevasse is an M.A.  of Oxfrod University.

At Macroom Petty Sessions on Wednesday, before a bench of local magistrates, Claude Chevasse, of Midhurst Oxfordshire, was charged under the Defence of the Realm Act with refusing to answer questions reasonably, addressed him by the police at Ballingeary.  The majority of the bench decided to impose a fine of $4, and £1 cost.  Mr. Power (for accused) said his client would not pay any fine, and he asked to have at alternative named.  The alternative of one month without hard labour was arranged.  The accused was offered a week to pay the fine in case an appeal was not proceeded with.’

Lance-Corporal Wm. Keegan, 5th Connaught Rangers (16ht Division, Irish Brigade), who was wounded in France on 29th January. He is the third son of Mr. Ml Keegan, Eyre Street, Galway, and has another brother, Tom, fighting in the same regiment, as well as two brothers-in-law, Lce-Corporal Higgins and Lce- Corporal Cullen. Rev. Br Macarten Keegan, who is at present in India, is his brother.