You are here: Home>Galway Commemorating>2016 Blog Archive>From the Papers 19 February 1916: Billiards in the Mechanics Institute & Peculiar Situation in Lettermore School

From the Papers 19 February 1916: Billiards in the Mechanics Institute & Peculiar Situation in Lettermore School 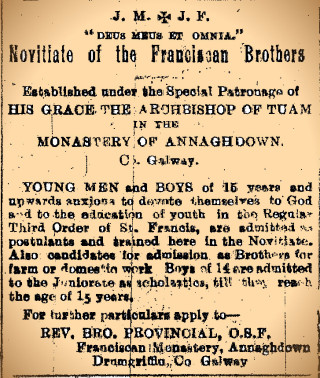 Extract from the Galway Express 19 February 1916

‘On Thursday night, the billiard room of the Galway Mechanics’ Institute was packed with numbers of people desiring to witness a brilliant contest between Connaught’s two best cueisms, Mr. Jack Meldon, who for years held the amateur championship of Ireland, and Mr. Frank Lenihan, the proceeds being in aid of the St. Vincent de Paul Society.  The match was for 500 up, both starting level.  Meldon led for the first century, when a good break put Lenihan in front and he maintained the lead to the end, winning on the score of 500-420.’

In November last Miss Margaret Kineavey, the principal teacher of Lettermore (mixed) National School, died.  She had been in charge of the school for some fifteen years, and resided in the school residence during that period.  Her brother, Mr Martin Kineavey, principal teacher of Lecallow school, in the same parish, resided with his late sister and two other sisters, in the Lettermore residence for over 10 years.  On the death of Miss Kineavey, her brother applied for a transfer from the Lettercallow school to his late sister’s school at Lettermore, so that he and his two other sisters would be left in occupation of the school residence at Lettermore, they having no home of their own.  For some reason Mr. Kineavey’s application was refused, and a young teacher appointed to Lettermore school and residence, Mr. Kineavey receiving a notice, it appears, to surrender the residence to the newly-appointed teacher within a fortnight.  The people of Lettermore, amongst whom the Kineaveys had lived for so many years, and with whom they were deservedly popular, resented this treatment of Mr. Kineavey and his siters, and refused to send their children to the Lettermore school to the new teacher, who in consequence left the school, which has remained closed for over a month, Mr. Kineavey being still in possession of the Lettermore residence, awaiting a decision of the affair.’