You are here: Home>Galway Commemorating>2016 Blog Archive>The insurrection fizzling out

The insurrection fizzling out 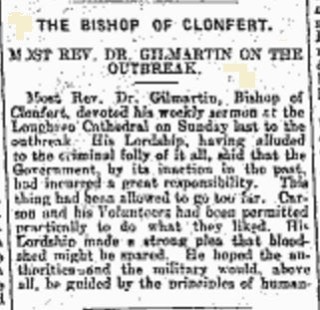 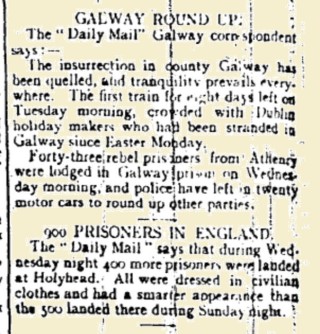 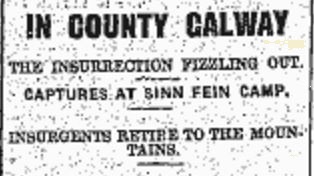 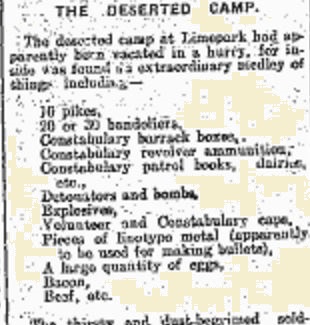 ‘The Bishop of Clonfert on the Sinn Fein Outbreak

Most Rev Dr. Gilmartin, Bishop of Clonfert, delivered a sermon at the Loughrea Cathedral on Sunday last in which he condemned the Sinn Fein outbreak.  His Lordship having alluded to the criminal folly of it all, said that the Government by its inaction in the past, had incurred a great responsibility.  This thing had been allowed to go too far.  Carson and his volunteers had been permitted practically to do what they liked.  His Lordship made a strong plea that bloodshed might be spared.  He hoped the authorities and the military would, above all, be guided by the principles of humanity.’

The “Daily Mail” Galway correspondent says:-  The insurrection in county Galway has been quelled, and tranquility prevails everywhere.  The first train for eight days left on Tuesday morning, crowded with Dublin holiday makers who had been stranded in Galway since Easter Monday.

Forty-three rebel prisoners from Athenry were lodged in Galway prison on Wednesday morning, and police have left in twenty motor cars to round up other parties.

The “daily Mail” says that during Wednesday night 400 more prisoners were landed at Holyhead.  All were dressed in civilian clothes and had a smarter appearance than the 500 landed there during Sunday night.’

Insurrection Fizzles Out, Captures at Sinn Fein Camp, Insurgents Retire to the Mountains

Pieces of E… metal (apparently to be used for making bullets)

A large quantity of eggs