You are here: Home>Galway Commemorating>2016 Blog Archive>The Death of a Fenian & a Fierce Encounter at Clonfad

The Death of a Fenian & a Fierce Encounter at Clonfad 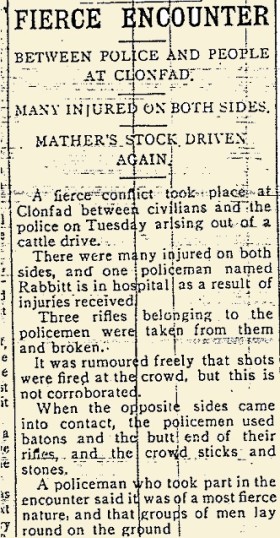 Between Police and People at Clonfad.

Many Injured on Both Sides.

The death of John Beirne who fought in the 1867 rising

‘The burial has taken place of Mr John Beirne, Lecarrow, Ballintubber, aged 78.  He took part in the ’67 Rising, and was a personal friend of Ned Duffy, a leading spirit in the movement.’