You are here: Home>Galway Commemorating>2016 Blog Archive>From the Papers 12 February 1916: Strange Affair in Galway, Carmen held up and searched

From the Papers 12 February 1916: Strange Affair in Galway, Carmen held up and searched 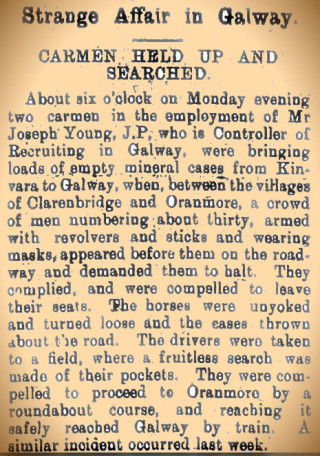 Extract from the Kerry Sentinel 12 February 1916

CARMEN HELD UP AND SEARCHED

About six o’clock on Monday evening two carmen in the employment of Mr Joseph Young, J.P, who is Controller of Recruiting in Galway, were bringing loads of empty mineral cases from Kinvara to Galway, when between the villages of Clarenbridge and Oranmore, a crowd of men numbering about thirty, armed with revolvers and sticks and wearing masks, appeared before them on the roadway and demanded them to halt. They complied, and were compelled to leave their seats. The horses were unyoked and turned loose and the eases thrown about the road. The drivers were taken to a field, where a fruitless search was made of their pockets. They were compelled to proceed to Oranmore by a roundabout course, and reaching it safely reached Galway by train. A similar incident occurred last week.

Extract from the Irish Independent 07 February 1916

Mr. W. O’Malley, M.P. speaking at Ballinasloe, referred to Sinn Feiners in Co .Galway who were trying to stop recruiting and advised the people to have nothing to say to them. He asked the farmers to “cease their selfish policy and send their sons to fight for Ireland”