You are here: Home>Galway Commemorating>2016 Blog Archive>From the Papers 22 January 1916: Discord in County Galway as Volunteers are Recruited

From the Papers 22 January 1916: Discord in County Galway as Volunteers are Recruited

Taken from the Galway Express on 22 January 1916 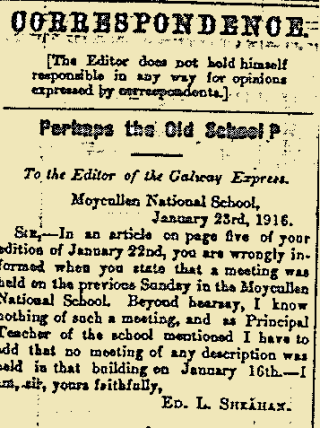 Snippet From the Connacht Tribune Published on 22 January 1916

On Sunday last a meeting was held in Moycullen for the purpose of establishing a corps of the Irish Volunteers in the district.  A couple of hundred people attended, and a large corps was formed. The speakers included Captain Mellows, Organiser, and Mr. G. Nichols, B.A., Solicitor and Mr. L.E. O’Dea, Solicitor, Galway.

We are informed that a meeting of the Sinn Fein party was hel in Moycullen School House on Sunday last at which  some wild statements against the British were made, and that on the conlcusion of the meeting cheers were given for the Kaiser.  It is difficult to believe that such conduct should be carried on during the very terribly critical times Ireland is at present going through.  Several reports reach us, one of which is that a postman who draws his income from the British Government, was seen engaged in posting bills for the meeting.  Two schoolmasters, whose incomes come from the Treasury, were present.  We are informed that two teachers named Messrs O’Madden and Walsh took part in the proceedings.  Mr O’Madden resides in Moycullen House, the residence of the late gallant officer the Hon. Captain Campbell.  We refrain from further comment, except to express surprise that a National School building should be given for a meeting which smacks so much of disloyalty.

To the Editor of the Galway Express

Sir- In an article on page five of your edition of January 22nd, you are wrongly informed when you state that a meeting was held on the previous Sunday in the Moycullen National School. Beyond hearsay, I know nothing of such a meeting, and as Principal Teacher of the school mentioned I have to add that no meeting of any description was held in that building on January 16th – I am, sir, yours faithfully, Ed. L Sheahan