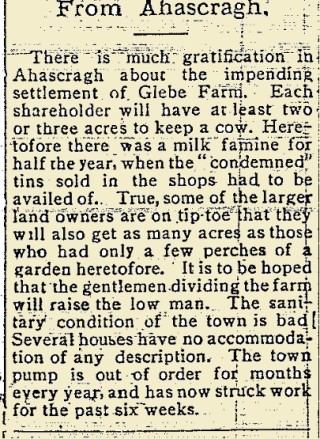 Snippet from the Galway Express 22 July 1916 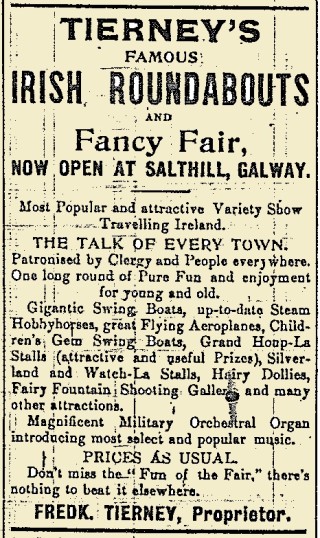 Snippet from the Galway Express 22 July 1916

The town pump is out of order for months every year …


There is much gratification in Ahascragh about the impending settlement of Glebe Farm.  Each shareholder will have at least two or three acres to keep a cow.  Heretofore there was a milk famine for half a year, when the “condemned” tins sold in the shops had to be availed of.  True, some of the larger land owners are on tip-toe that they will also get as many acres as those who had only a few perches of a garden heretofore.  It is to be hoped that the gentlemen dividing the farm will raise the low man.  The sanitary condition of the town is bad.  Several houses have no accommodation of any description.  The town pump is out of order for months every year, and has now struck work for the past six weeks.’

Register your car for hire

‘Car-owners plying for hire in and around Galway are requested to have their cars registered at the office of the Urban Council, the Courthouse, as soon as possible, so as to avoid the inevitable rush for registration on the Races days.  The cost of number plates is 1s. each.’

‘It is almost unnecessary for us to call attention to the great Fancy Fair and Bazaar which will be held in Eyre Square Park on the second week of August.  The programme will be one of great interest, and already scores of young ladies are preparing for the Bicycle Competition.  The Baby Competition will be one of rare interest, and from “information received” there will be large entries for this interesting event.  The Carnival should be adequately supported, and we trust that our readers in country districts will support Miss Persse’s arrangements for special trains from Athlone, Ballinasloe, etc.  Mr. Thomas Elliott, the passenger traffic manager, has arranged for a special from Athlone arriving in Galway at 11.30 and returning at 9 o’clock, p.m.’