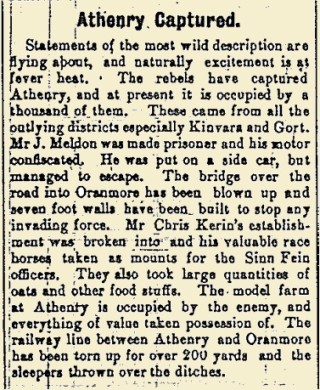 Snippet taken from the Galway Express 06 May 1916 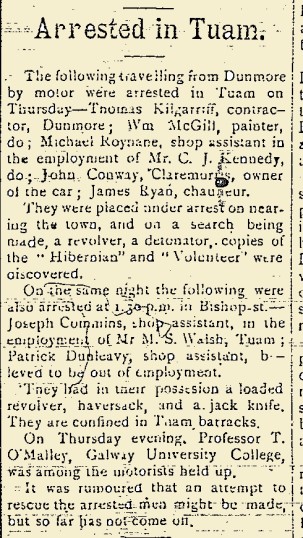 Snippet from the East Galway Democrat 06 May 1916

Statements of the most wild description are flying about, and naturally excitement is at fever heat.  The rebels have captured Athenry, and at present it is occupied by a thousand of them.  There came from all the outlying districts especially Kinvara and Gort.  Mr J. Meldon was made prisoner and his motor confiscated.  He was put on a side car, but managed to escape.  The bridge over the road into Oranmore has been blown up and seven foot walls have been built to stop any invading force.  Mr Chris Kerin’s establishment was broken into and his valuable race horses taken as mounts for the Sinn Fein officers.  They also took large quantities of oats and other food stuffs.  The model farm at Athenry is occupied by the enemy, and everything of value taken possession of.  The railway line between Athenry and Oranmore has been torn up for over 200 yards and the sleepers thrown over the ditches.’

They were placed under arrest on nearing the town, and on a search being made, a revolver, a detonator, copies of the “Hibernian” and “Volunteer” were discovered.

On the same night the following were also arrested at 1.30 p.m. in Bishop-st. – Joseph Cummins, shop assitant, in the employment of Mr M. S. Walsh, Tuam; Patrick Dunleavy, shop assitant, believed to be out of employment.  They had in their possession a loaded revolver, haversack, and a jack knife.  They are confined to Tuam barracks.

On Thursday evening, Professor T. O’Malley, Galway University College, was among the motorists held up.

It was rumoured that an attempt to rescue the arrested men might be made, but so far has not come off.’