You are here: Home>Galway Commemorating>2016 Blog Archive>From the Papers 01 January 1916: Postal Servants and the War, Tuam Oyster Eaters and Christmas at the Front

From the Papers 01 January 1916: Postal Servants and the War, Tuam Oyster Eaters and Christmas at the Front 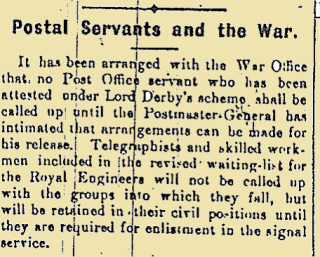 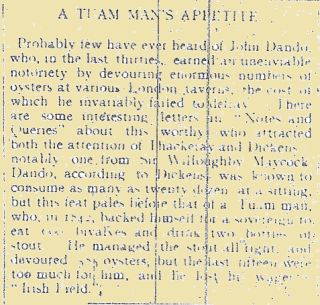 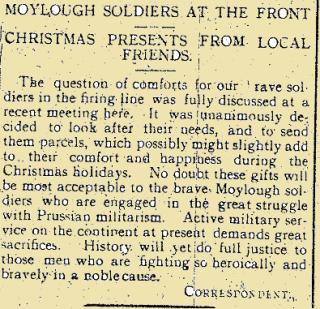 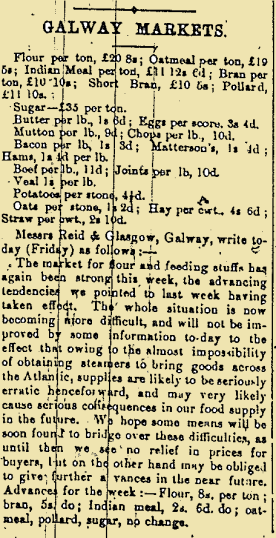 ‘Postal Servants and the War’

It has been arranged with the War Office that no Post Office servant who has been attested under Lord Derby’s scheme shall be called up until the Postmaster-general has intimated that arrangements can be made for his release.  Telegraphists and skilled workmen included in the revised waiting-list for the Royal Engineers will not be called up with the groups into which they fall, but will be retained in their civil positions until they are required for enlistment in the signal service.’

Probably few have ever heard of John Dando who, in the last thirties, earned an unenviable notoriety by devouring enormous numbers of oysters at various London taverns, the cost of which he invariably failed to defray.  There are some interesting letters in “Notes and Queries” about this worthy who attracted both the attention of Thackeray and Dickens, notably one from Sir Willoughby Maycock Dando, according to Dickens was known to consume as many as twenty dozen at a sitting, but his feat pales before that of a Tuam man, who in 1842 backed himself for a sovereign to eat 600 bivalves and drink two bottles of stout.  He managed the stout all right and devoured 585 oysters, but the last fifteen were too much for him, and he lost the wager.’

‘Moylough Soldiers at the Front

The question of comforts for our brave soldiers in the firing line was fully disclosed at a recent meeting here.  It was unanimously decided to look after their needs, and to send them parcels, which possibly might slightly add to their comforts and happiness during the Christmas holidays.  No doubt these gifts will be most acceptable to the brave Moylough soldiers who are engaged in the great struggle with Prussian militarism.  Active military service on the continent at present demands great sacrifices.  History will yet do full justice to those men who are fighting so heroically and bravely in a noble cause.’

‘An explosion occurred at the waterworks on last Monday, and there was a consequent temporary suspension of the water supply to the town.  Water was on again at midday on Tuesday.

The production of “Peg o’ my  Heart” on next Thursday night is eagerly looked forward to by the playgoing public of Ballinasloe.

The British casualties to the 9th December numbered 528,227.