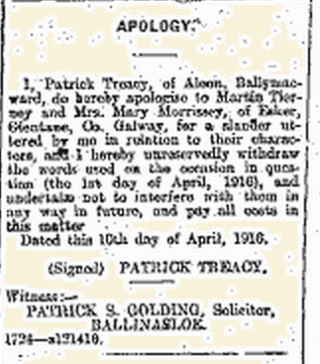 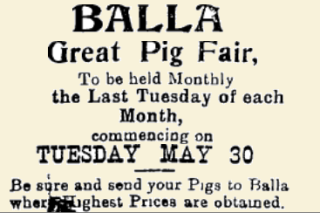 The feature of the Claremorris fair held on Saturday was the brisk demand for calves and two-year-old bullocks, the former fetching from £11 to £15 and the latter from £20 to £22 each.

The differences between the Galway dockers and the local employers, (which were adjusted last December pending the expiration of an old agreement 9 which expired early this month) are again engaging attention in the circles concerned.  The permanent labourers of the city employers were given, in December, a war bonus of 2s a week, but the demand for a similar concession and a 9-hour day for the casual labourers at the docks was not favourably received and was withdrawn.  It has again been presented, and a conference was held last Saturday afternoon between representatives of the employers and the local branch of the Dock Labourers union.  We understand, however, that the demand was refused by the employers, and that at present no definite course of action has been decided upon by the Union.  We understand that the doc labourers who were employed on Thursday and today (Friday) in coaling the bunkers of two of H.M. patrol boats, Setter and Magneta, at the Docks repeated the demands to the firm who were supplying the steam coal, and it was conceded- namely, 8s a day of nine hours (7s a day for the labourers filling the coal in the yard an increase of 1s.), an increase of 1s.

Pte. Michael J. Hayes, 2nd Batt.  Connaught Rangers, has written to his mother, who resides at 4, St. Bridget’s Terrace, Galway, stating that he is a prisoner of war at Sheik Saed, Central Asia.  In the big engagement against the Turks in Mesopotamia last January, in which the Connaughts distinguished themselves, and in which several Galway soldiers were wounded, Pte. Hayes was captured, the date being the 23rd of that month.  Pte. Hayes fought from Mons right down to Asia, through all the big engagements.  In the early days of the war he was wounded at the battle of the Marne, just after carrying to late lamented Major Sarsfield, whose leg was shattered by a shell, from the firing zone.  When recuperating from the wound received on the Marne, he furnished this paper with a glowing account of the early phases of the struggle.  Though he has never had the good fortune to be mentioned in dispatches, Pte. Hayes’s bravery was on many occasions referred to by his comrades.