Sentencing the cattle-drivers of Mullaghmore

The matter of the estate of Charles D. O’Rorke 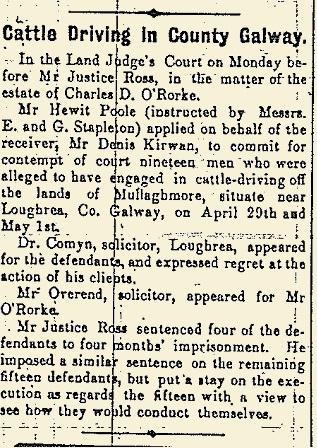 Extract from the Galway Express 24 June 1916

In the Land Judge’s Court on Monday before Mr Justice Ross, in the matter of the estate of Charles D. O’Rorke.

Mr Hewit Poole applied on behalf of the receiver, Mr Denis Kirwan, to commit for contempt of court nineteen men who were alleged to have engaged in cattle-driving off the lands of Mullaghmore, situate near Loughrea, Co. Galway, on April 29th and May 1st.

Mr. Justice Ross sentenced four of the defendants to four months’ imprisonment.  He imposed a similar sentence on the remaining fifteen defendants, but put a stay on the execution as regards the fifteen, with a view to see how they would conduct themselves.’