From the Papers 29 January 1916: Police Raid in Dublin

What it said in the papers. 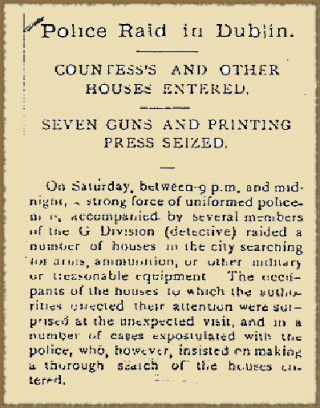 Countess and Other Houses Entered

On Saturday, between 9pm and midnight, a strong force of uniformed policemen, accompanied by several members of the G Division (detective) raided a number of houses in the city searching for arms, ammunition, or other military or trasonable equipment.  The occupants of the houses to which the authorities erected their attention were surprised at the unexpected visit, and in a number of cases expostulated with the police, who, however, insisted on making a thorough search of the houses entered.  The residence of the Countess Markievics was the first place visited.  At about 9 p.m. the police, to the number of about 40, surrounded the house, which was at once entered by a number of G men.  There were a number of visitors in the house at the time, but the Countess was not at home.  A search was immediately instituted of all the rooms in the house, and a small printing press, together with some cases of type, were seized and conveyed in a cab to the Castle.  The police remainded in the house for about two hours.

Later in the night, houses in Great Brunswick Street and Ballbough road were visited, and in a house in the former street seven rifles were seized.  This is stated to be the only batch of arms discovered by the police during the night.  No arrests were made, nor was any resistance offered in any instance to the police in the carrying out of their duties.

At the Castle headquarters the police  authorities stated that they knew nothing about the matter.’