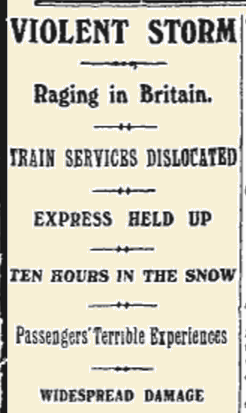 Snippet from the Freemans Journal 29 March 1916 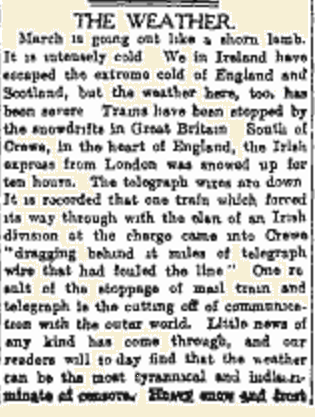 Snippet from the Freemans Journal 29 March 1916

March is going out like a shorn lamb. It is intensely cold. We in Ireland have escaped the extreme cold of England and Scotland but the weather here, too, has been severe. Trams have been stopped by the snowdrifts in Great Britain. South of Crewe, in the heart of England, the Irish express from London was snowed up for ten hours. The telegraph wires are down. It is recorded that one train which forced its way through with the plan of an Irish division at the charge came into Crewe ” dragging behind it miles of telegraph wire that had fouled the line” One result of the stoppage of mail train and telegraph is the cutting off of communication with the  outer world. Little news of any kind has come through and our readers will today find that the weather can be the most tyrannical and indiscriminate at

Heavy snow and frost at the end of March are not without precedent. But they are unusual as to be quite a novelty to many of our day. The snowing up of the trains between London and Holyhead is rare even in mid-winter, and the passengers who were prisoners for ten hours had an unusual and extremely  unpleasant experience. Their sufferings in the cold were intense.

In Ireland March was a severe and trying month and last week was one of the worst portions of it. The temperature was below freezing point every night in all stations where observations are taken, and in several of the souther towns the thermometer descended below the lowest record during the week in Edinburgh. The temperature of Limerick, open to the mild influence of the Gulf Stream, went as low as that of Edinburgh, while Galway, Waterford and Kilkenny reached 26 degrees, being 13 degrees lower than the Scottish capital. The highest temperature in Dublin last week was 46.2. In the closing week of March last year it went up to 56 degrees. The lowest record in the city last week was 27.3 A year before the lowest was 31.5. The citizens rose several morning last week to find their streets a sheet of ice. The frost melted away rapidly before the sun , but there were several falls both of hail and snow which, though it did not lie deep on the ground, covered it with white for a while. The temperature as is seen from the above varied considerably and spells of extreme cold followed rapidly on comparably high readings. These rapid changes caused many to suffer from colds and the weather was trying to the old and delicate, and one result of it was an increase in respiratory disease. There were no fewer than twenty eight deaths from pneumonia and thirty two from bronchitis in Dublin last week, while the deaths from these diseases numbered 47 and 87 throughout the country.

Agricultural operations have been seriously impeded by the March weather. The short intervals of frost came between long and heavy spells of rain. There was little sun. The fields were sodden and un-workable, and men, animals, machinery and implements were idle except for what ever carting there was to be done. The month on many holdings was almost a blank, and it is hoped that April may bring a favourable change that may enable agriculturalists to make up for lost time. The month was very unfortunate for preparations had been made for heavy cropping. But the seeding season was broken by the rains and the soaked condition of the land and it is feared that the snowing on all but the most arable lands will be very late and that there will be in any case a larger amount of fallow than was intended. The attention required now for corn will postpone in many places the sowing of potatoes until the end of April and May. The root crops will demand special attention this season, and it is unfortunate for them that this unfavourable March should follow on the bad harvest of last year. The frosts that we have had this week will prove helpful in breaking up the ground sodden by the rain, and is a good preparation for the dry and sunshiny weather that is looked to to save the agricultural situation.