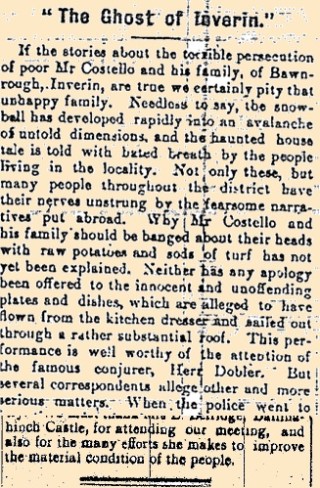 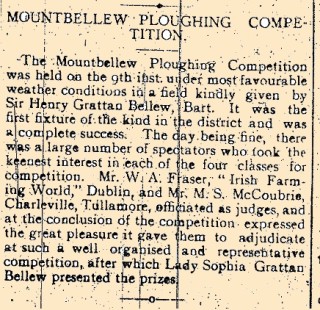 “The Ghost of Inverin.”

If the stories about the terrible persecution of poor Mr Costello and his family, of Bawnrough, Inverin, are true we certainly pity that unhappy family.  Needless to say, the snowball has developed rapidly into an avalanche of untold dimensions, and the haunted house tale is told with bated breath by the people living in the locality.  Not only these, but many people throughout the district have their nerves unstrung by some fearsome narratives put abroad.  Why Mr Costello and his family should be banged about their heads with raw potatoes and sods of turf has not yet been explained.  Neither has any apology been offered to the innocent and unoffending plates and dishes, which are alleged to have flown from the kitchen dresser and sailed out through a rather substantial roof.  This performance is well worthy of the attention of the famous conjurer, Herr Dobler.  But several correspondents allege other and more serious matters.  When the police went to investigate the ghostly proceedings they took possession of the kitchen, and whilst calmly sitting at the turf fire, so kindly provided by the ghost, they were greeted with a volley of fine black turf, which came from “nowhere.”  It is stated – but we have our doubts – that the men in blue fled from the place as if the Huns were after them in alarming numbers.  The rumour that a clergyman visited the house and was struck with a sod of turf is too ridiculous for words.  These “haunted house” fairy tales in the present days of education and enlightenment are evidently invented for the purpose of intimidating some person or persons who may have outside interests.  It will give us great pleasure to send a correspondent of the Galway Express to the premises, and our pressman his guaranteed that he will spend the night in the haunted house.  He states he will want a car to convey him to the scene of the ghostly proceedings, and has also commandeered a six-shooter and a tidy little shot gun.  This is a sporting offer, which may safely be accepted.

‘Sir,- Representatives from nearly every town and city in the United Kingdom were in London on Saturday in connection with munition work, and had an interview with Mr. Lloyd George.  Now Galway had not one person there to speak for this old town, although we have plenty of places lying idle – a reproach to every man living in this old city.  Mr. Lloyd George promised to give Ireland her share in whatever work he had charge of.  Mr. John Redmond introduced the deputation and at the end of the interview thanked Mr. Lloyd George for his generous words.  We should try to call to mind this town as it was 40 years ago, with its busy streets and well-off shopkeepers.  Today we seem to be all asleep, more especially those who represent the people – Galwegian.’

The Mountbellew Plouging Competition was held on the 9th inst. under most favourable weather conditions in a field kindly given by Sir Henry Grattan Bellew, Bart.  It was the first fixture of the kind in the district and was a complete success.  The day being fine, there was a large number of spectators who took the keenest interest in each of the four classes for competition.  Mr. W. A. Fraser, “Irish Farming World,” Dublin, and Mr. M. S. McCoubrie, Charleville, Tullamore, officiated as judges, and at the conclusion of the competition expressed the great pleasure it gave them to adjudicate at such a well organised and representative competition, after which Lady Sophia Grattan Bellew presented the prizes.’