From the Papers 12 February 1916: Recruiting in Aran & Mountbellew Farmers Club 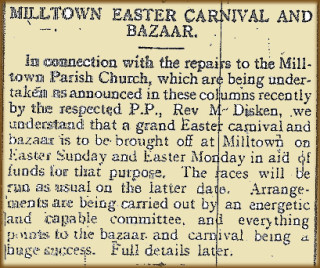 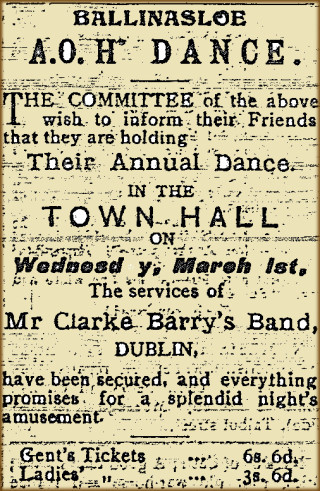 Accompanied by Sapper Behan, Private Sir James O’Donohue, J.P., Lieut. Muirhead, etc., Mr. William O’Malley, M.P. visited Aran Island on Friday last.  As the wires were out of order, the party were unable to communicate with the islanders to arrange a meeting, but the police sergeant was good enough to send word to some of the inhabitants, and a fairly large crowd gathered to hear speeches from Sir James O’Donohue and the Member for Connemara.

Pte. Sir James O’Donohue, who addressed the people first in Irish, and afterwards in English, pointed out in simple language the object of the visit.  He was listened to with marked attention throughout his very forcible and eloquent speech.

Mr. William O’Malley, M.P., said he was glad to visit the island of Aran and trusted that some of the young men would join the army now fighting for the liberation and the right of Ireland (applause).

Notwithstanding what they might be told by certain people, they must realise that this was Ireland’s war as much as it was England’s, for if England went down before the German’s Ireland would undoubtedly go down too.  Ireland’s future depended on the part she played in this world war and those who told the people – he did not care who they were – that young Irishmen should stay at home and that the war was no concern of theirs, were men who were prepared to see Ireland governed by the barbarous Huns, and who had no true conception of the great and far-reaching issues involved in the war (applause).  Already a few Aran men had joined the army, but, continued Mr. O’Malley, “I am told that these brave fellows had to steal away at night because of the influence that was brought to bear to make them stay at home.”

A large meeting of the Mountbellew Farmers’ Club was held in the Agricultural College, Mountbellew, On Sunday. Very Rev. J. Canon Fallon, P.P. presiding.  Rev. Bro. Joseph Daly, President, Agricultural College, gave and interesting lecture on “A Dairy Cow.”  After the lecture, lantern slides were shown, illustrating the cost of producing milk, and giving a record of the College dairy herd with the milk and butter fat production from each cow, and showing the profit and loss between good and bad milkers.  The different breeds of cattle were also illustrated, the lecturer pointing out the characteristic points of each breed.  The Rev. Bro. Joseph advised the members to increase their area under tillage, especially wheat.  It was decided to hold a plough match under the auspices of the Club, and the Sub-Committee was deputed to arrange date, etc.  Rev Bro. Joseph informed the meeting that Sir H. Grattan Bellew had kindly placed, at the disposal of the Club, a field for the competition.  On Tuesday evening the Sub-Committee met, and decided on having the ploughing match on March 9th.  It was arranged to have two classes for swing ploughs, and two classes for chill ploughs.’

In connection with the repairs to the Milltown Parish Church, which are being undertaken as announced in these columns recently by the respected P.P., Rev Mr. Disken, we understand that a grand Easter carnival and bazaar is to be brought off at Milltown on Easter Sunday and Easter Monday in aid of funds for that purpose.  The races will be run as usual on the latter date.  Arrangements are being carried out by an energetic and capable committee and everything points to the bazaar and carnival being a huge success.’