You are here: Home>Galway Commemorating>2016 Blog Archive>From the Papers 29 February 1916: Troops for Galway

From the Papers 29 February 1916: Troops for Galway 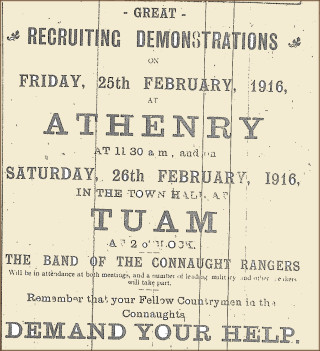 It is well that the agitation for the quartering of troops in Connacht should be kept up.  Since the Editor of the “Tribune.”  In a speech at the Town Hall several months ago, suggested the idea, it has been taken up warmly, not alone by Galway, but by other towns in the Province.  Sligo wants troops “particularly for Sligo.”  The second town in the province, as a result, we presume, of the recent agitation, is now in the happy position that it will have a conference of its own with the Lord Lieutenant and Mr John Redmond in attendance, so that it will have the opportunity of teaching the Galway recruiting Committee how a conference should be run.  We congratulate Sligo, and being possessed of no inter-provincial jealousies, we wish it success.