From the Papers 16 February 1916: New Cathederal for Galway 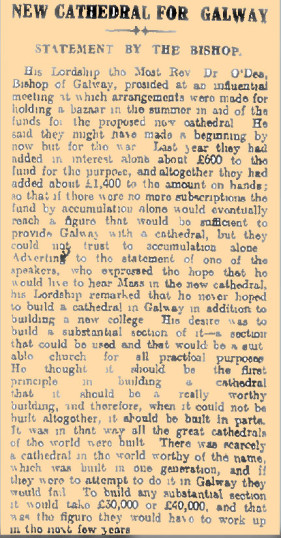 Statement by the Bishop

His Lordship the Most Rev Dr O’Dea, Bishop of Galway, prosided at an influential meeting at which arrangements were made for holding a bazaar in the summer in aid of the funds for the proposed new cathedral. He said they might have made a beginning by now but for the war. Last year they had added in interest alone about £600 to the purpose, and altogether they had added about £1,400 to the amount on hands so that if there were no more subscriptions the fund by accumulation alone would eventually reah a figure that woudl be sufficient to provied Galway wtih a cathedral, but they could not trust