You are here: Home>Galway Commemorating>2016 Blog Archive>Nabbed in the act of changing his socks

Nabbed in the act of changing his socks 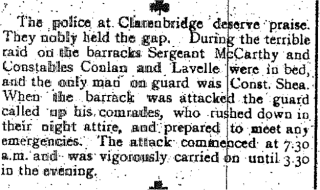 ‘He was nabbed … in the act of changing his stockings’

‘It would seem that the arrest of Bryan Molloy, who is an unmarried farmer, was effected under very dramatic circumstances.  It was believed that he was the leader of the rebels of the district of Coolough (about five miles from Galway), and that he was in command of the engagement at Carnmore cross-roads, where Constable Whelan lost his life.  Molloy disappeared after the Volunteers had surrendered and dispersed, but a constant vigil was kept over his house and the vicinity, for it was assumed that he was hiding in the locality.  On last Thursday morning week some policemen, who were in ambush noticed the rebel leader stealthily approach the house which he entered.  They approached the dwelling, and while guards were placed at all exits a few policemen entered and found Molloy in the act of changing his stockings.  He was nabbed.

The police at Clarenbridge deserve praise.  They nobly held the gap.  During the terrible raid on the barracks Sergeant McCarthy and Constables Conlan and Lavelle were in bed, and the only man on guard was Const. Shea.  When the barrack was attacked the guard called up his comrades, who rushed down in their night attire, and prepared to meet any emergencies.  The attack commenced at 7.30 am. and was vigorously carried on until 3.30 in the evening.’