You are here: Home>Galway Commemorating>2016 Blog Archive>From the papers 11 March 1916: 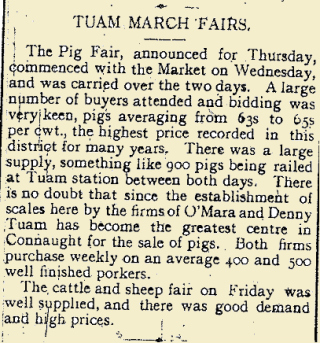 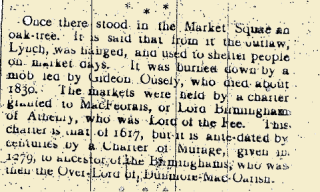 ‘The Milltown Bazaar arrangements are being energetically pushed forward, and everything points to an exceedingly successful fete.  Trains are to be run to and from Claremorris on Easter Sunday and Easter Monday.’

‘I regret to notice that there has been a complete dearth of shipping at the Galway docks for the past three weeks, and there is no promise of improvement.  Owing to the fact that the Government demand a huge monopoly of the shipping facilities, it has been found almost impossible to get vessels for coastal trading as in pre-war days, and the prospect which confront our dock labourers of enforced idleness during a period when the prices of foodstuffs are daily increasing, are by no means encouraging.’

‘I see that in the centre of the water-logged land in Leunareeva there is a large slab marking the grave of two cholera victims.  It is isolated from all the habitations around, and gives rise to saddening thoughts.  May the occupants rest in peace in their solitary quarantine.  Grange House was used as a hospital during the famine by those striken by the “black fever.”  There was another hospital at Carrowkeel.

Like all other small Irish towns there was in olden days a classical school in the courthouse in the Square.  The famous James Greally wielded the ferule with ponderous erudition.  Its classic [?] are now redolent of legal learning and petty sessions.

Once there stood in the Market Square an oak-tree.  It is said that from it the outlaw, Lynch, was hanged, and used to shelter people on Market Days.  It was burned down by a mob led by Gideon Ouseley, who died about 1830.  The markets were held by a charter granted to MacFeorais, or Lord Birmingham of Athenry, who was Lord of the Fee.  This charter is that of 1617, but it is ante-dated by centuries by a Charter of Murage, given in 1279, to ancestors of the Birminghams, who was then the Over-Lord of Dunmore-Mac-Oarish.’

The Pig Fair, announced for Thursday, commenced with the Market on Wednesday, and was carried over the two days.  A large number of buyers attended and bidding was very keen, pigs averaging from 63s to 65s per cwt., the highest price recorded in this district for many years.  There was a large supply, something like 900 pigs being railed at Tuam station both days.  There is no doubt that since the establishment of scales here by the firms of O’Mara and Denny Tuam has become the greatest centre in Connaught for the sale of pigs.  Both firms purchase weekly on average 400 and 500 well finished porkers.

The cattle and sheep fair on Friday was well supplied, and there was a good demand and high prices.’