You are here: Home>War of Independence in Galway>Ambush at Miltown: The North Galway Flying Column Kill Two RIC in Deadly Attack, 27 June 1921 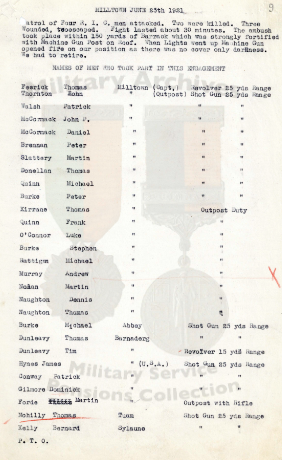 Details of the Volunteers who participated in the deadly attack at Milltown, 27 June 1921.
Military Archives, North Galway Brigade Report, MSPC/MA/A28) 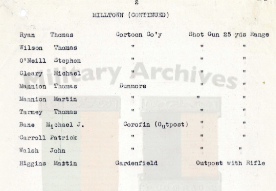 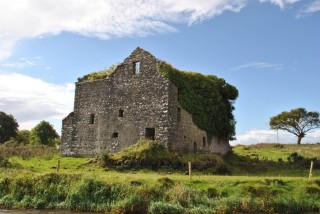 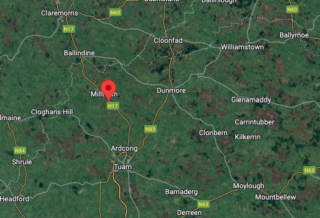 The village of Milltown is situated close to the Galway-Mayo border; the North Galway countryside was the setting for several attacks by the North Galway Brigade at the height of the Independence Struggle in 1920 and 1921.

Following the Moylough ambush on 5 June 1921, the North Galway Flying Column, commanded by Patrick Dunleavy had been making their way across the north Galway countryside, staying in the homes of small farmers, sleeping in outhouses and sheds, avoiding the enemy and attempting to establish ambush sites. Their second and most deadly attack came on 27 June when they struck at a four-man police patrol in the village of Milltown, killing two RIC.

The ambush took place within 150 yards of the police barracks situated in the village which was strongly fortified with a machine-gun post on the roof. Two RIC men, Sergeant James Murren (Police Number 57292) and Constable Edgar Day (Police Number 77676) were killed in the attack. Sergeant Murren was aged 47 and originally from Sligo. Constable Day was aged 23 years old, unmarried and from Nottingham, England.

A section of the column, including senior officers Thomas Nohilly, Thomas and Timothy Dunleavy, Thomas Ryan, Thomas Feerick, Patrick McHugh and Peter Brennan, had made their way to Carrareagh village, near Milltown, on the day of the attack when they got word that a patrol of the RIC had left Milltown and was returning through the district. This group linked up with local Volunteers from Milltown and surrounding district to carry out the ambush.

Thomas Donnellan of the Milltown Company alerted the Column to the presence of the police:

We watched the barrack until we saw a patrol of four go out, sometime between 9 and 10 pm. When they left the barrack, they took a short cut by an old path through the fields in the direction of Banagher village on the Kilconly–Milltown road. Volunteer Sullivan and I followed them, taking advantage of the ground and of hedges and fences so that they would not see us trailing them. They walked very leisurely along the path. They were armed with rifles. After walking about a mile along the path they came out on the main road at the village of Banagher. We were still watching them from the fields and saw that they were returning to Milltown by the main road instead of the way they had gone out. We ran as fast as we could to notify the Flying Column at Carrareagh.

We met them between Carrareagh and Milltown proceeding in the direction of Milltown along the grass margin of the main Tuam–Milltown road. They were coming close to the village to be on hand in case of a call. I remember distinctly that they were coming along the side of the road in single file. We reported to Commandant Dunleavy the number of RIC in the patrol and the direction they were taking. Commandant Dunleavy sent us back immediately to confirm that the RIC were still returning to Milltown by the main Kilconly–Milltown road. We went back to the junction where the Kilconly–Milltown road joins the Tuam–Milltown road about two hundred and fifty yards to the south of Milltown. Volunteer Sullivan went into the fields and I went along the road in the Kilconly direction. The Flying Column quickly followed us and were soon in position to attack the patrol. The position taken up by the IRA was on the right- hand side of the main Tuam–Milltown road as one goes from Tuam to Milltown and about ten to twenty yards on the Milltown side of the junction made by the Tuam–Milltown and the Kilconly–Milltown roads. The IRA occupied positions only on one side of the road. I had gone only about twenty yards along the road in the direction of Kilconly when I heard the patrol coming. I then reported to the Flying Column that they were very close at hand, and remained with them as my work was finished. The RIC rounded the bend in a few minutes and when they got into the ambush position fire was opened on them. Two of the RIC were killed outright and one was badly wounded. The fourth member of the patrol escaped. He got inside the fence opposite to where the IRA were in position and escaped to the barrack in Milltown. (BMH/WS 1,378; Thomas Donnellan)

Volunteer Thomas Nohilly of Corofin, who was a senior member of the column, later recalled events:

Immediately, we got word that the patrol was returning to the village of Milltown by the Liskeavy Road, we took up positions right inside the fence of the Tuam–Milltown road, on the right hand side leading from Tuam to Milltown, and on the Milltown side of the junction made by the Tuam–Milltown and Liskeavy–Milltown Roads. The patrol consisted of six RIC walking in pairs, with about ten yards between each pair. I was on the end of the line nearest to Milltown, and I remember that I opened fire when the leading pair of RIC came opposite my position. I cannot remember any signal or order to fire. Captain Timothy Dunleavy was beside me. When we fired, the two leading RIC dropped. I am sure that one of them was killed by our first shots. I cannot say if the other was killed, but he was wounded and put out of action. One or two of the RIC who escaped the first volley, took up positions on the opposite side of the road.

I fired at the flashes made by them when they fired. After about a quarter of an hour, we withdrew as fire was being brought to bear on our positions by machine guns from the RIC barrack in the village, about three hundred yards away. We did not succeed, on account of this fire, in capturing any of the arms of the fallen RIC. We suffered no casualties. We did not know the RIC casualties that night, but we heard next morning that two of the patrol were killed and two wounded. We withdrew in the direction of Carrareagh and, on our arrival there, we were met by a young priest, Fr Concannon, now a Bishop in the foreign missions, who gave us his blessing and wished us every success.  (BMH/WS 1,437; Thomas Nohilly)

The police sent up Verey lights during the attack to alert police re-enforcements but the column successfully retreated to the north Galway countryside and remained at large until the truce in July without carrying out further successful operations. Forced to sleep in the outhouses and barns of sympathetic farmers, Thomas Mannion recalled: “the local people supported us in every way possible. They always gave us food and shelter and always responded extremely well in the matter of collections.” According to Patrick Treacy, “No words of mine could do justice to their kindness and generosity. Food and shelter were ours at all times of the day and night. We were no doubt a burden on them but they regarded it as a great privilege to help us.”

Sergeant James Murren (Police Number 57292) died alongside Constable Edgar Day, when the North Galway Flying Column attacked their patrol in Milltown village on 27 June 1921. He was aged 47 and originally from Sligo.

Constable Day (Police Number 77676) died alongside Sergeant Murren when the North Galway Flying Column attacked their patrol in the village of Milltown in the north-east of the County. Day was aged 23 years old, unmarried and from Nottingham, England.

The North Galway Flying Column was formed in early 1921 in north-east Galway and was composed of young men on the run from their homes in the districts of Milltown, Glenamaddy, Barnaderg, Dunmore, Kilkerrin and surrounding parishes. Commanded by Patrick Dunleavy from Barnaderg, the column was involved in several lethal engagements with crown forces, including at Moylough on 5 June and Milltown on 27 June 1921. Several members left detailed accounts of the column’s activities with the Bureau of Military History. Details of the membership of the column are listed in the Nominal Membership Rolls of Irish Republican Army held by the Military Archives (RO 240A) and are available to download online.