You are here: Home>War of Independence in Galway>Volunteer Bill Freeney Dies at the Athenry Cricket and Tennis Pavilion, 29 June 1921 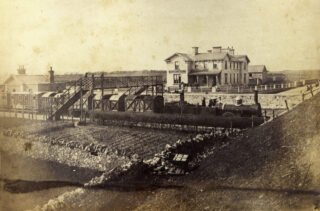 The Railway Hotel, located a hundred yards from the now demolished Athenry Cricket Pavillion was used by the Galway Landowners' Association and the Galway Unionist Association for meetings due to its proximity to the railway line.
Chetham's Library 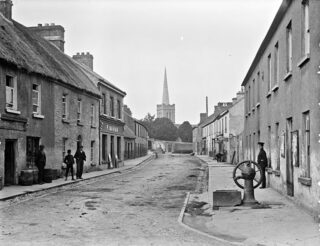 The historic market town of Athenry was the scene of several republican attacks during the period 1921-23.
Courtesy of National Library of Ireland 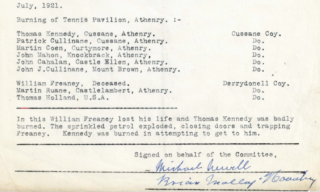 Details of the tragedy at Athenry in which Volunteer William Freeney lost his life are contained in the Military Archives.
Military Archives (Galway No 1 Brigade Activity Report)

The Athenry Cricket and Tennis Pavilion was a social centre for the county’s aristocracy and senior military officers, who would also often socialise in the nearby Railway Hotel, which was used by the county’s Landowners’ Association and the Galway Unionist Association as well. The Cricket and Tennis Club was an ideal venue due to its proximity to the railway station in Athenry, allowing military officers from Galway City and landowners from across the county to travel to the venue with relative ease. Tennis and cricket were regarded as the sporting pursuits of the unionist community in Galway and venues such as the Galway Golf Club and the Galway Tennis Club were vandalised during the period.

According to the Connacht Tribune: “the pavilion was 75 feet by 18 feet, was built around 1890, and was the property of the County Galway Tennis and Cricket Club, as were the adjoining grounds. It had a concrete abutment and was roofed with corrugated iron which was incinerated by the flames. The building consisted of ladies and gents dressing rooms and a dining room. It appears to have been a handsome building admirably suited to its purpose, and was erected in a well selected spot from which a pleasant view was obtainable.”

Volunteer William (Bill) Freeney, Irish Volunteers, Derrydonnell, Athenry, died on active service while burning down the building on 29 June 1921. He was a member of the Derrydonnell Company and held the rank of Captain. Freeney was engaged in the destruction of the building, located on the Tuam Road, when he burned to death after becoming trapped in the premises. He was employed as a groom, and was aged 25 years.

In order to avoid violent reprisals against the family, neighbours and comrades, the Volunteers and the Freeney family did not immediately claim the body and a military inquiry proceeded without determining the identity of the deceased. Freeney was initially buried in an unmarked grave but his body was later retrieved and claimed by his family when the danger of violent retribution had passed. The Connacht Tribune recorded events as follows:

Set ablaze early on Friday morning last, the pavilion at Athenry Tennis and Cricket ground was destroyed. Half buried in the debris on the morning following were found the charred remains of a human being.

Shortly after midnight many of the inhabitants of Athenry were awakened by the lurid flames from the north side of the town which shone all over the place. After some time the local RIC visited the place and found the pavilion had been almost gutted and gone beyond any hope of salvage.

When the place ceased smouldering on the following day the charred remains of a human being rendered unrecognisable by the flames, were found in the cellar. Underneath the terrible spectacle was found an empty petrol can. Two similar cans were also found. Two razors, a scissors, some coins, a silver watch chain were found near the body. The circumstances under which the victim got there was not clear, but all agreed he died a terrible death. So disfigured was the body that Dr Quinlan who made the post mortem examination, was unable to say whether it was male or female. The head, hands and legs were burned away, nothing remaining but the mere trunk.

At first it was thought that the victim was a tramp who entered the place for a night’s shelter and after lighting a pipe or cigarette neglected quenching a match which set fire to the place. The fact that three petrol tins were found in the ruin does not confirm this theory and the belief is shared that the unfortunate victim, ignorant in the use of petrol, met his death under these tragic circumstances. The fact that a bicycle was found close to the place tends to confirm this view. A buckle, believed to be that of a trench coat, was also found in the debris. As the remains were not claimed, they were handed over the local R.O. who interred them in the cemetery.

Volunteer Thomas Kennedy of Cussane, Athenry, was also burned in the incident as he tried to rescue his comrade from the flames. The site of the Pavilion is no long extant and has been cleared to make way for the construction of the Dun Ri housing development on the Tuam Road on the northern outskirts of the town of Athenry.

Participants in the destruction of Athenry tennis and Cricket Pavilion were: