You are here: Home>War of Independence in Galway>Loughgeorge Police Barracks Destroyed by the Irish Volunteers, 25 May 1920

Loughgeorge Police Barracks Destroyed by the Irish Volunteers, 25 May 1920 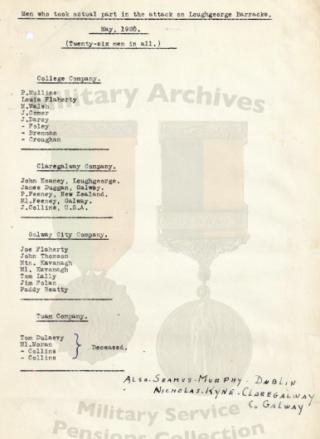 List of Volunteers from the Galway No 1 Brigade and the North Galway Brigade who took part in the attack at Loughgeorge.
Courtesy of the Military Archives (Mid Galway Brigade Report, MA/MSPC/A21-3)

The Galway No. 1 Brigade, based around Galway City and including the very militant Castlegar and Oranmore Companies, alongside a handful of members of the North Galway Brigade and students from University College Galway, led by a number of officers, including Louis Darcy of Headford, on 25 May 1920. attacked the Loughgeorge RIC barracks (Darcy would later be murdered by the Black and Tans on 23 March 1921).

Loughgeorge is a small village situated about 13 kilometres (eight miles) from Galway on the main Tuam to Galway Road; the barracks and attached buildings were completely destroyed in the attack but there were no police casualties. Thomas Dunleavy of Barnaderg commanded six men from the North Galway Brigade, alongside Martin Niland, Nicholas Kyne and Michael Walsh of the Galway No. 1 Brigade. The attack lasted less than an hour when the attacking force was ordered to retreat by Seamus Murphy who, at that time, commanded the County Galway Brigade.

The Volunteers possessed only two rifles and a quantity of gelignite. Volunteer Martin Fahy, a student at UCG recalled:

We knew there was no hope of taking the barrack with only two riflemen. The two rifles were the only ones the College Company possessed. It was, therefore, more in the nature of an experiment than anything else that we tried the explosives.

The gelignite exploded as planned but failed to shatter the gable wall of the building, while the attackers kept the barracks under intense fire. The outer buildings attached to the barracks were completely burned down. Fahy recalled:

When we arrived in Loughgeorge everybody in the village had gone to bed. There was no sign of movement anywhere. We had expected an attack on the barrack on a big scale as we understood that a determined effort was to be made to take the post. We were, therefore, very surprised that no Volunteers met us.

We discussed the situation and decided to try the explosive on the gable of the barrack. I have already stated that at Rosmuc and one or two other places we had been disappointed and had to go back to Galway without getting an opportunity to use explosives. So on this occasion we decided to use them.

We dug a hole two feet deep and two feet in diameter at the gable of the barrack. We put about two stone weight of gelignite tied up in sacking into the hole. We covered the gelignite with the heaviest stones we could get from the wall across the road. We used a fuse about two feet long. I think it was Martin Neiland who applied the match to the fuse. We crossed the road and took cover. We were very pleased with the result of the explosion. It blew a hole four to five feet deep in diameter in the wall. Our two riflemen opened fire on the barracks from across the road and called on the garrison to surrender. There was no reply and fire was not returned from the garrison. We were very puzzled at this. We thought that perhaps the barrack had been evacuated overnight. At the same time our party was not strong enough to take the chance of entering the barrack. We also suspected that the apparent inactivity of the RIC might be a ruse to get us into a trap. We knew the strength of the RIC garrison to be eight – one Sergeant and seven Constables. We had nobody to assist us. We had a poor knowledge of the locality and so we decided that there was nothing further to be accomplished and withdrew.

The failure to penetrate the building and seize the rifles and material within was a blow to the morale of the Galway Volunteers and Volunteer Thomas Hynes sought to blame the brigade commander Seamus Murphy:

“They [the RIC] were prepared to surrender if anybody came through but Murphy would not allow anyone to enter the barracks.”

The fallout from the failure of the assault caused a rupture between the Galway Brigade leadership and battalion officers, with Nicholas Kyne, Officer Commanding the Galway No 1 Battalion, resigning in protest at the lack of militancy of the Murphy leadership. Seamus Murphy fled Galway a few months later in September 1921 at the height of the Black and Tan terror.