You are here: Home>War of Independence in Galway>D Company of the Auxiliaries in County Galway: Who were the Men who Brought Terror to the Countryside, 1920-21?

D Company of the Auxiliaries in County Galway: Who were the Men who Brought Terror to the Countryside, 1920-21? 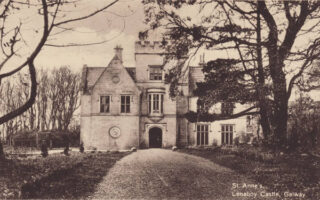 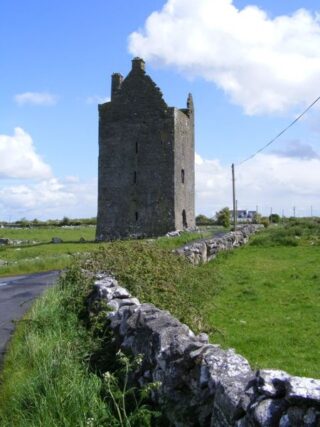 Drumharsna Castle, where they brothers were brought to be killed, is situated near Ardrahan, and was an early garrison for D Company of the Auxiliaries in September 1920 before moving to the suitable premises at Lenaboy in Galway City. 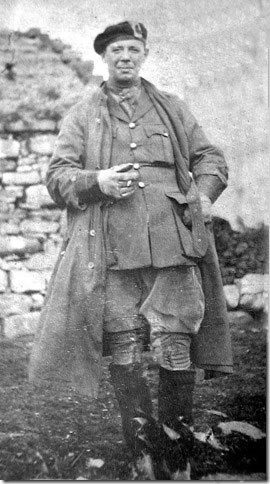 Lieutenant G.F.A. Grubbe, formerly of the Berkshire Yeomanry. Grubbe’s stint in charge of D Company was to be brief and he was dismissed from his post as commander in May 1921 and resigned from the force at his own request.
Theauxilarries.com

During the independence struggle, the British administration insisted that the IRA and Cumann na mBan were not legitimate military opponents; therefore, the police and not the military, were to be primarily responsible for defeating the republication forces. From early 1920 until the truce in July 1921, almost 14,000 men were recruited to bolster the 10,000-strong Royal Irish Constabulary. The Black and Tans, so called due to their mixed khaki uniforms, were recruited in early 1920 and sworn in as constables to reinforce the local RIC. The vast majority of recruits were veterans of World War One with extensive military experience. The upsurge in the republican campaign led to a second wave of police recruitment in July 1920 that saw the creation of an Auxiliary Division that operated independently of the police. While the Auxiliaries were a distinct force and generally viewed themselves as superior to the Black and Tans, the Irish public frequently made little distinction between them.

D Company of the Auxiliaries was based in Galway with their headquarters at Lenaboy House, near Salthill in Galway City, while the Black and Tans were billeted in RIC barracks and temporary accommodation around the county. It was at Lenaboy House where Fr Michael Griffin was most likely killed by members of D Company following his abduction on 14 November 1920. The crimes of the Auxiliaries in Galway involved a series of atrocities, including the beating and torture of civilians and republicans alike, and the burning and destruction of homes across the County.

The activities of the Black and Tans and the Auxiliaries in Galway became notorious as soon as they arrived in 1920. Wanton violence, drunkenness and indiscipline was part of a wider pattern that involved the killing of prominent republicans while in the custody of the police. Michael Moran, leader of the Tuam Brigade, John O’Hanlon, a senior Volunteer at Turloughmore, Sinn Féin councillor, Mícheál Breathnach of Galway City, Fr Michael Griffin, curate at Rahoon in Galway City, were all killed in less than six weeks between November and December 1920 alone. Other senior republicans, such as Louis Darcy, Headford, who was killed after being taken from the train at Oranmore on 23 March 1921, and John Geoghegan of Moycullen, taken from his home in Moycullen and shot on 20 February 1921, were killed as part of a wider strategy to defeat the republican movement in Galway.

While these more high-profile cases gained widespread attention, many other Galway civilians, whose names quickly faded from popular memory, were killed in a similarly brutal fashion. Following a republican ambush on a convoy of Auxiliaries at Kilroe on 19 January 1921, the crown forces killed four innocent men at random at their farms in the Headford and Caherlistrane district: Thomas Collins, Keelkill, Headford, James Kirwan, Ballinastack, Glenamaddy, William Walsh, Clydagh, Headford, and Michael Hoade, Caherlistrane. The taking of innocent men from their homes at night to be killed continued throughout the period.

D Company Auxiliaries initially had outposts at Drumharsna Castle, near Ardrahan in south Galway, where the Loughnane brothers were most likely murdered, and at Annagh House in Ballymacward in the north of the county. These sites were occupied in early September 1920 but were later vacated before the end of the year. D Company was initially based at the property of Patrick Moylett, a grand mansion called The Retreat, situated on the western outskirts of Galway City. Moylett later fled the county following the seizure of his property, but probably due to the size of the detachment – over eighty men – D Company subsequently seized Lenaboy House and transferred their men and equipment to the larger property in Salthill.

D Company was commanded by a series of officers who were highly decorated war veterans from privileged families with long traditions of military service across the British empire. In the short period of just nine months, the Galway Company had four commanders, all of whom were directly implicated in murder during their time in Ireland. From August 1920, D Company Auxiliaries was commanded by Major Arthur Patrick Nichol. Nichol had served in France with the Royal Field Artillery during World War One and had a long military record. In a letter to the Galway newspapers, following a series of murders by his forces in September and October 1921, Major Nichol, wrote:

All our men are ex-officers and, I hope, gentlemen. I wish it to be distinctly understood that we are not here to shoot people but to restore order. We are obliged to take certain steps to do this. The police were practically confined to their barracks and could not walk abroad in certain districts until we came. Peaceable law-abiding people have nothing to fear from us.

Despite Nichol’s statement that people had nothing to fear, violence against civilians continued, with burnings, beatings and robberies reported across in the county. The violence escalated to such an extent that the British administration could no longer turn a blind eye and in October 1920 Nichol was dismissed for ‘excess drinking’, stripped of his rank and replaced by Lt Col Frederick H.W. Guard, formerly of the Royal Scots. Nichol was later transferred to Cork, another centre of intense violence by the Auxiliaries, but resigned from the force in February 1921. and died at Dumfries, Scotland in 1962.

Like his predecessor, Lt Colonel Guard had lived in Canada for a time before a stint in the West African Railways in Sierra Leone and later Ghana. In 1915, he returned to England and was commissioned in the Hampshire Regiment. His regiment was involved in heavy fighting in France and Guard was promoted to acting Major; he was awarded a DSO in 1917 and posted to Russia and received numerous awards for gallantry. In October 1920, Guard joined the Auxiliaries and was posted to Galway as second in command of D Company in mid-November before replacing Nichol as commander later that month.

Guard was personally involved in the murder of the leader of the North Galway Brigade of the IRA, Michael Moran, on 24 November 1920. He was one of three Auxiliaries escorting Moran from detention at Earl’s Island Barracks when he was shot dead. Guard’s tenure in command of D Company was short-lived but he oversaw some of the forces’ worst atrocities in the county, including the murder of the Loughnane brothers of Beagh on 27 November 1920. The actions of his men may have led to his dismissal and in February 1921 he was redeployed to the Headquarters Depot in Dublin to be replaced by Lieutenant G.F.A. Grubbe, formerly of the Berkshire Yeomanry. Guard later served in Iraq with the RAF and died of pneumonia and malaria in 1927, aged just 37 years.

Lieutenant Grubbe’s stint in charge of D Company was to be equally brief and he was dismissed from his post as commander in May 1921 and resigned from the force at his own request. Grubbe’s replacement as commander in Galway was none other than the notorious Captain W.L. ‘Tiny’ King, formerly of the South African Overseas Expeditionary Force. King had spent twenty years in South Africa before joining the Auxiliaries and was involved in heavy fighting in North Africa during World War One. He was initially appointed commander of F Company, based in Dublin Castle. During this period, he was directly implicated in a particularly notorious incident during the independence struggle when he was one of three officers responsible for the torture and shooting of IRA Volunteers Conor Clune, Peadar Clancy and Dick McKee on 21 November 1920. King was court martialled for the killings and found not guilty; incredibly, King was subsequently implicated in a second double murder of two IRA Volunteers, Patrick Kennedy and Joseph Murphy, who were tortured and killed at Drumcondra in February 1921. King was sensationally acquitted once again of this second couple of murders, just weeks before taking command in Galway.

With King in command, killings of civilians and republicans inevitably continued during his tenure in Galway; civilians Hugh Tully and Christopher Folan were taken from their homes in Bohermore, Galway, on the night of 12 May and shot dead. Thomas McKeever was taken from his home at Dunmore in the middle of the night on 21 May and taken to a nearby field and shot. Like most victims of the Auxiliaries, they had no connection to politics. Following the end of the conflict, King departed with the rest of his force and was later promoted to Major during the Second World War. He died in 1942 at Gaza, Palestine, where he is interred in the Gaza War Cemetery.

Lenaboy House is situated on a large site off Taylor’s Hill and Rosary Lane in Salthill, and was initially the property of prominent Galway landowning family, the O’Haras. Built in a Tudor Gothic style and standing on a ten-acre site, the property was one of the grandest residences in Galway City. Following the foundation of the state, the property was bought by the Sisters of Mercy and was the site of St Anne’s Industrial School. The property is now owned by the Health Service Executive.

The killing of the Loughnane Brothers of Beagh by members of D Company is discussed in length in separate article on this site.

An immense amount of archival material on the Auxiliaries has been digitised and is available on the website: The Auxiliary Division of the Royal Irish Constabulary at  https://www.theauxiliaries.com.