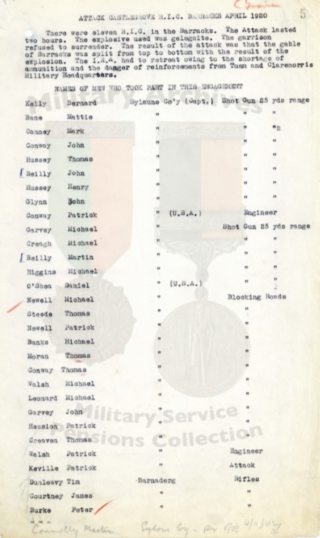 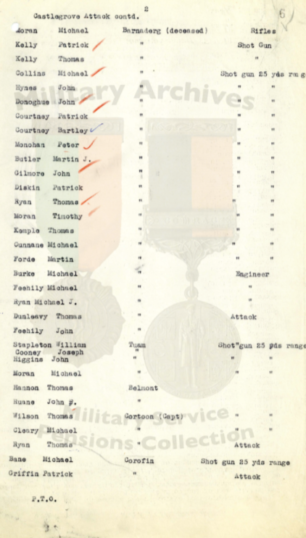 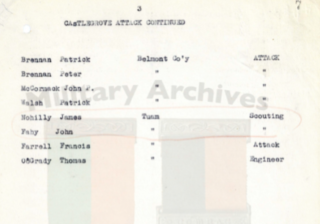 Following an attack on January 1920 on the Castlehackett police barracks in the parish of Belclare, a few kilometres from Castlegrove, the North Galway Brigade, led by Michael Moran, struck for the second time on 26 March with an attack on the Castlegrove RIC Barracks in the parish of Kilconly, located roughly equidistant between Tuam and Williamstown, on 26 March 1920.

A large group of badly armed Volunteers held eleven RIC under siege in the barracks for around two hours before leaving the scene when their ammunition began to run out. The aim of the attack was to penetrate the barracks and gain access to the rifles and related material within. The gable wall of the barracks was split from top to bottom by gelignite but the garrison refused to surrender and held out despite the barrage.

Like the previous operation at Castlehackett, the Castlegrove attack was carried out by a large group of badly armed Volunteers from the surrounding districts of Sylane, Tuam, Barnaderg, Belmont, Corofin and Cortoon, led once more by Michael Moran of Tuam.

We had a test mobilisation one night, shortly before the attack at Castlegrove and the result was very satisfactory. On the night of the attack, forty men turned out. The majority of them were engaged in blocking roads and guarding road blocks which were made by felling trees.

The barracks was a very big, two-storey building with many windows. I remember that we were to open fire when the mines at the gables exploded. I think there was no explosion at one gable and there were two at the other. We opened fire at the windows and door in front of us, the moment we heard the explosion. Fire was returned immediately from the barrack and Verey lights went up. The attack lasted two hours at least. No police were harmed in the attack but the barracks was badly damaged beyond use, and was permanently evacuated by the police the following day.