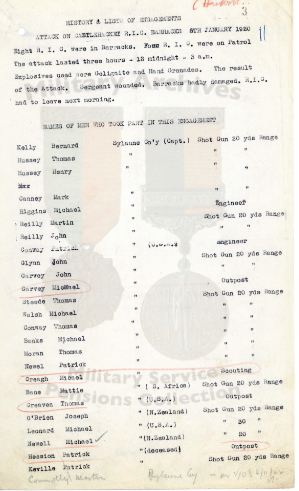 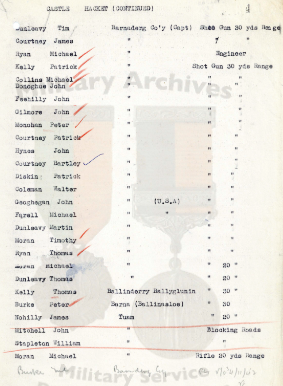 The North Galway Brigade of the Irish Volunteers, under the command of Michael Moran of Tuam, opened the War of Independence in North Galway by attacking the RIC barracks at Castlehackett on 10 January 1920. The Castlehackett Barracks, located between Headford and Tuam, in the parish of Belclare, was attacked by a group of about seventy Volunteers, armed mainly with shotguns, early on the morning of Saturday 10 January. The group failed to penetrate the building and a small force of police remained inside. The aim of the attack was to breach the building and seize the weapons within; however, the Volunteers fled before police reinforcements arrived from Tuam.

The attack was originally fixed for the Twelfth Night but as Volunteer John Conway recalled: “as somebody suggested that it was little Christmas night and not a nice thing to have an attack on that Holy night, it was fixed for the following night”. A large group of Volunteers surrounded the barracks around midnight, keeping it under intermittent fire until around 3 am, as a garrison of eight police under Sergeant Higgins returned fire and successfully defended the building. The attack lasted several hours and grenades were unsuccessfully employed to blow the door of the building open. Volunteer Michael Higgins of Belclare later explained the reason for the attack:

There were about ninety shotguns in Castlehackett RIC Barracks and each of the garrison had a rifle and a revolver. The shotguns belonged mostly to people in the neighbourhood who had handed them in for safe-keeping or from whom they had been taken by force. About a dozen of the guns belonged to a shooting party that had handed them in after being entertained at Colonel Bernard’s of Castlehackett. I think the main idea was the capture of these weapons.

Sergeant Higgins was wounded in the face in the gun battle and the police evacuated the badly damaged barracks the following day. The group who attacked the barracks comprised men from the Sylane, Barnaderg and Tuam Companies of the North Galway Brigade.