You are here: Home>War of Independence in Galway>Deadly Gun Battle at Gallagh Hill, Dunmore, 19 July 1920 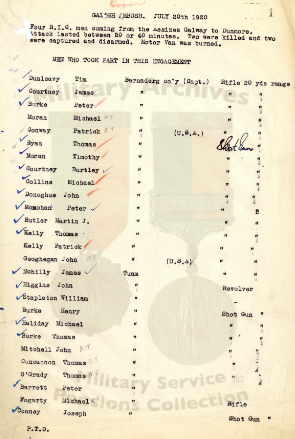 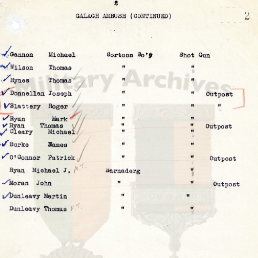 In the first lethal attack carried out by the Volunteers in North Galway during the War of Independence, a unit from the North Galway Brigade, comprising Volunteers from Tuam, Barnaderg and Cortoon, killed two members of the RIC on the Tuam to Dunmore Road at Newtown Darcy in the parish of Dunmore on 19 July 1920. The first successful ambush during this phase of the campaign was led by Michael Moran and Michael ‘Con’ Fogarty of the Tuam Brigade and Thomas Dunleavy of Barnaderg, at a wooded area, known as Gallagh Hill. Sergeant Beatty, along with Constables Brennan, Burke and Carey, left Tuam RIC Barracks for Dunmore in a police van at 9 pm on 19 July when they were ambushed about five kilometres (three miles) outside the town and Constables Burke and Carey were shot dead. The Volunteers said an act of contrition over the bodies of the two dead men before collecting their rifles and releasing the surviving RIC man. Constable James Burke (Police Number 66147), aged 28, came from Birr, Co. Offaly. Constable Patrick Carey (Police Number 66045), aged 29, was a native of Skibbereen, Co. Cork.

It was 7 pm when I arrived at Gallagh, on the Tuam-Dunmore main road, two-and three-quarter miles from Tuam. I cannot say who was in charge, but it was either Con Fogarty, Brigade O/C, or Michael Moran, Battalion O/C. Positions were taken up on the right-hand side of the road going from Tuam in the Dunmore direction. There were about twenty-five men, and all but three or four were in position when the van containing the RIC came into view round the bend of the road, about one hundred and fifty yards from the ambush position. The three or four men who were not in position were dragging a tree into position on the road, to form a road block to bring the van to a standstill. These men jumped over the fence and apparently were not seen by the occupants of the van which continued on its way until it stopped at the tree opposite the ambush position. I cannot remember if there was a scout at the bend of the road where the RIC van first came into view. The attacking party inside the fence occupied a space of only about twenty to twenty-five yards. They were side by side, almost touching one another. None of the IRA was placed on the far side of the road. When the van came to a halt, all our party opened fire on it. The RIC party jumped out of the car and two of them were killed in the centre of the road. One of them crossed the fence on the far side of the road and fired for about a quarter of an hour. I heard the bullets hitting the barbed wire above my head. I cannot say if the fourth man fired at all. He would have been the driver. The man who crossed the fence on the far side of the road surrendered with his hands up when (as far as I can now remember) his ammunition was exhausted. We collected three carbines and one .45 revolver. We got very little ammunition. The RIC party seemed to have a very limited supply with them. None of our party was hit.

Having burned their van and taken the papers carried by the RIC from a box like a trunk, we withdrew in the direction of Barnaderg. We stayed there until it got dark and then went home. We were anxious to avoid being seen armed in daylight. We had to warn some people who were guilty of loose talk following the ambush.

The attack provoked a furious response from the crown forces who looted and burned premises in Tuam later that day. Dragoon Guards stationed in Claremorris, along with police from Galway City and Vicar Street barracks in Tuam, rampaged through the town, looting public houses, setting fire to premises and shooting wildly, with the Town Hall, previously used as a Sinn Féin courthouse, among the buildings destroyed.

The Gallagh attack was organised by Michael Moran, who was central to the earlier attacks in the North of the County at Castlehackett and Castlegrove RIC barracks, and, following the ambush, he was forced to go on the run after the crown forces burned his family home. Moran, aged 27, was the most effective republican leader in the county and was arrested in November 1920. An escort of D Company Auxiliaries was taking him from Eglinton Street Barracks to Earl’s Island Barracks in Galway City on November 24 when he was shot dead, the military claiming at a military inquest that he was “shot while trying to escape”.