The Castledaly Ambush and Reprisals, 30 October 1920 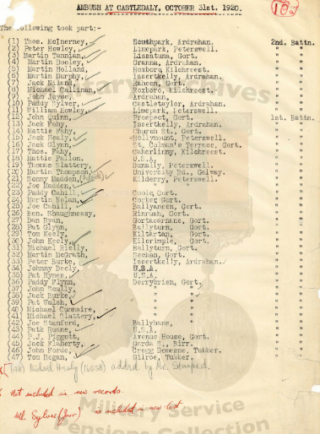 The Castledaly ambush was the first fatal ambush carried out by the Volunteers in South Galway and led to a series of reprisals and murders by the crown forces. Joseph Stanford was Captain of the Volunteer Company at Gort, subsequently Officer Commanding the South West Galway Brigade IRA, and later a founding member of the brigade’s flying column. Stanford was involved in the republican land courts in 1918 and 1919 and was forced to go on the run in October 1920; he left the most detailed account of the attack at Castledaly:

On the night of October 30th, Cappard House was taken over by men from Ardrahan, Kilbecanty, Peterswell and Gort Companies. Provisions were provided from the local shop and we all had some grub and lay about in the house until dark in the morning. We crossed by the mountain to Scalp, overlooking Castledaly Church. As we approached this point, we saw clearly five RIC men on bicycles, armed with rifles. They passed on towards Peterswell and were likely to turn again at any moment, so we got into position along the road, facing the church. We numbered between forty and forty-five, armed mostly with shotguns. There was at least one service rifle, and two martini rifles. The Battalion O/C and Vice O/C were armed with revolvers.

A scout was sent after the patrol towards Peterswell to bring back to the Column information as to what way they [the RIC] would return from Peterswell Cross. This scout, named Martin Dooley, followed the RIC on a bicycle and returned with the information that they were coming straight back to our position. As the scout returned to us, a man named Daly made repeated attempts on horseback to warn the RIC and Dooley and Jack Flaherty were put in charge of him. It was only at the threat of shooting him that he ceased his effort.

As the RIC were travelling about ten or twelve yards apart, they covered a stretch of road, sixty or seventy yards. So, we were placed in sections of seven or eight, stretching from the Crossroad to Daly’s Gate, covering about ninety or a hundred yards. Nobody was placed in the Church grounds but some men were placed outside it on the road leading to the back of the Church; these would number four or five and have at least two rifles.

The instructions were that each section was to take a man and see to him. No. 1 section were composed of Ardrahan Company; No. 2, Kilbeacanty and Beagh, including Pat Loughnane of Shanaglish, and one from Gort. The other sections were made up of Peterswell and Ardrahan Companies.

The RIC rode into us at a fairly slow pace, and the shooting began. Number One cycled past our No 1 section, taking his rifle with him. No 2 was knocked off his bicycle and staggered to the Church side of the road and got over the low wall of the Church grounds. He was unable to go any further, as fire was continuous on him and he died there. Numbers 3 and 4 got off their bicycles and left them and their rifles on the ground, crossing the Church grounds and across Roxboro Demesne towards the Barracks. Our men, who were placed on that road, opened fire on them but did not get any of them, although one was wounded. No. 5 also took this route to safety.

Constable Timothy Horan (RIC No. 60534), who died in the attack, was 40 years of age and originally from County Kerry; he was married with young children. Fr Corcoran, the parish priest at Kilchreest, gave the last rites to Constable Horan who died shortly after being anointed. The police party was led by Sergeant Driscoll and Constable Keane was seriously wounded. There was disagreement among veterans about whether the column meant to inflict casualties and Dan Ryan later wrote: ”Our general intention was, as far as I know, to capture their arms without killing the RIC.” The men would have had more cover if they chose to use the Church wall for cover, but as Ryan explained: “All the Volunteers were on the side of the road opposite Castledaly Church as it was thought that we should not take advantage of consecrated ground.” Ryan claimed that the local gentry was quick to react to the attack: “Daly of Castledaly rode on horseback cross country to inform the RIC at Kilchreest of the attack.”

Joe Stanford later regretted how the column had handled the attack: “While the result was not too good for the number of men engaged, it could be put down to two factors. One was the site chosen; the other was the fact that, owing to extensive raids, all ammunition had to be kept out of doors and was partially damp.”  Volunteer Thomas Keeley recalled: “I have often been wondering how the other three members of the RIC were not killed or wounded, in view of fire from thirty men being brought to bear on the RIC party of five, and I have come to the conclusion that buckshot was not able to penetrate their tunics.”

Following the ambush, many of the men and officers involved were forced to go on the run and the people of the locality braced themselves for the arrival of the crown forces. Dan Ryan recalled: “Reprisals followed immediately. On Saturday evening the RIC opened indiscriminate fire around the village of Kilchreest. At midnight on the same night, they burned Carty’s and Coy’s dwelling houses in Ballinacurra, a quarter of a mile from the village of Kilchreest. They also burned Fallon’s dwelling house at Scalp, Castledaly, as we passed that house on our way from the ambush.” Patrick Glynn recalled that Volunteer Peter Howley’s home at Ardrahan was also burned. It was believed that Fr Corcoran and Sergeant Cunningham persuaded the Black and Tans from burning the village of Kilchreest. Patrick Glynn later recalled: “Volunteer Michael Connell of Kilmacduagh got such a severe beating that his mind was affected up to the day of his death.” Volunteer Martin Fahy later wrote:

On the day following the Castledaly ambush, that is 1st November 1920, the Black and Tans made their first appearance in Peterswell. Twelve to fifteen of them came into the village. They were not drunk but were in a playful humour. They went into Hayes’ public house where some men were drinking after eleven o’clock mass. The Tans searched them and took all the money they had. They found one or two men who had no money and to these they gave some of the money they had taken from the others. Two of the men left the bar and were made roll in a pool of liquid manure in their best suits. The Black and Tans also took a man named Healy to a well about twenty yards from the public house. They made him stand in the well up to his waist in water for a few minutes. When they let him out they asked him if he would box one of their men. He said he would. One of the Tans handed his rifle and overcoat to one of his party, Healy took off his jacket and the fight commenced. Healy got the better of the contest, the Tan refusing to continue after ten minutes of continuous boxing.

The Tans subsequently burned the Fahy home at Peterswell, Martin and John having taken part in the attack, and badly beat family members, as Martin recalled: “The Tans had moved them and my sister Katie out of the house prior to pouring petrol on chairs and stairs and setting them alight. My mother was taken from the house on a mattress as she was old and feeble.” (BMH/WS Martin Fahy, p. 16) “I slept for a few weeks in the only room left standing in an unoccupied and dilapidated dwelling house not far from my home in Dunnally. After that my brother John, Captain of the company, Volunteer John Madden and I, got the idea of building a hideout in a cock of hay which was about half a mile from my home. We slept there from November 1920 until January 1921.”

Following the attack, the senior officers that organised the ambush began sleeping in a canvas tent at Gortacornane Wood, constructed from a layer of dry straw and heavy blankets. According to Dan Ryan: “We had a fair deal of comfort in the tent. We used it only for sleeping as many of us could not sleep at home after the Castledaly ambush. We went for meals to local houses where we were always welcome. At times three or four of us slept in the tent, at other times, up to ten. We were very careful to approach the tent from different points so as not to make a path.”

Following the Castledaly attack, the crown forces burned homes near the site of the ambush: however, much worse was to follow. Two days later, on 1 November, Eileen Quinn, a 24-year-old, heavily pregnant mother of three, was shot dead by the Auxiliaries from a passing lorry at Corker, Kiltartan, as she sat on the front wall of her garden with her infant in her arms. She managed to crawl to her kitchen and lingered for around seven hours, bleeding heavily, before succumbing to her wounds. She was consoled in her final hours by Fr John Considine, who had also administered the last rites to Constable Horan. He sent word of the shooting to the RIC; however, the head constable at Gort refused to come.

The IRA in South Galway was now under severe pressure as crown forces raided the district searching for Volunteers who took part in the attack; as Ryan recalled: “We were on the defensive, and it was no easy job. It was our hardest time. There was no enemy party coming our way small enough to be attacked with the arms available to us.”

At the court of military inquiry into Quinn’s shooting, it was declared that she was shot dead “by one of a number of shots fired as a precautionary measure and in view of these facts a verdict of death by misadventure must be brought.” The shooting prompted questions by Irish MPs in the House of Commons; however, the chief secretary for Ireland, Sir Hamar Greenwood, defended the actions of the Auxiliaries: “in counties like Galway as it is today, the police and military have every right to anticipate ambushes and to prevent them if possible.” Quinn’s murder prompted the poet W.B. Yeats to compose one of his most well-known poems, Reprisals and it is also referred to in Nineteen Hundred and Nineteen:

Can leave the mother, murdered at her door,

To crawl in her own blood, and go scot-free.

Participants in the Castledaly ambush, 31 October 1920

The following list of participants in the Castledaly ambush was compiled for the Military Service Pension Bureau in 1935 by Volunteer officers Joseph Stanford, Gort, and Thomas McInerney, Ardrahan. Joseph Stanford listed Patrick Loughnane as having taken part in the ambush in his statement to the Bureau of Military History; however, he is not included on this list, presumably as it was assembled for the purposes of pension applications. Details are reproduced here as they appear in the original document: