The Easter Rising in Galway 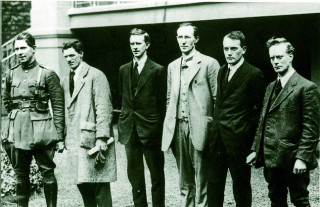 As soon as the Great War broke out in August 1914, members of the Irish Republican Brotherhood (IRB), operating as a secret caucus within the Irish Volunteers, began to plan a rebellion against British rule in Ireland. Operating on the old IRB maxim that ‘England’s difficulty is Ireland’s opportunity’, they planned for a countrywide rebellion. The Germans agreed to supply 20,000 rifles; organisers were sent throughout the country to radicalise local nationalists and train them in arms; and conspirators met in Dublin and elsewhere to discuss military strategy and political objectives.

As part of this initiative, Liam Mellows was sent to organise the Irish Volunteers in County Galway in March 1915. Mellows was born in Lancashire in 1892 to Irish parents, and was then reared in County Wexford. Later he gained some military training and joined the IRB in Dublin. Frank Hynes, captain of the Athenry branch of the Irish Volunteers, recalled the arrival of Mellows in the town:
‘We got word from Dublin that an officer was being sent down to organise and train the Volunteers in County Galway . . . When he arrived I was introduced to a little fellow with glasses. My impression of him was that he may be a clever lad—he was about 22 years—but couldn’t be much good at fighting. His name by the way was Liam Mellows. He came in when the men were lined up, six footers most of them. Liam addressed them, “Now men I was sent down to get you to do a bit of hard work, so I want you to be prepared for a week of very hard work”. I could see the faintest trace of a supercilious smile on some of the men. When he was finished talking Larry [Lardner, the commanding officer of the Galway brigade of the Irish Volunteers] and himself went off to arrange about digs. Then the smiles broke out to laughing. “Who is the ladeen,” asked one fellow, “who talks to us about hard work?”’
In time, however, Mellows won the support and respect of the majority of the Irish Volunteers in Galway, and in 1966 a statue of him was erected in Eyre Square in Galway city.

Mellows quickly organised the separatists in Galway and found many recruits for the Irish Volunteers in a well-organised secret society that had links to the Irish Republican Brotherhood (IRB). An agrarian secret society had existed in Galway since 1907 and was largely responsible for the waves of land agitation that swept across the county during the first two decades of the new century. However, this secret society was itself a revival of a secret society that had originated in the early 1880s, and probably had roots in the secret society tradition of the early nineteenth century. There was enormous poverty throughout the west of Ireland at that time, with the majority of the population surviving on a diet of potatoes and little else. Indeed, most landholdings were too small and too poor in quality to provide the small farmers who lived on them with a reasonable standard of living. Consequently, there was continued agitation by small farmers to implement land redistribution in the region.

In particular, smallholders agitated against farmers (known as graziers) who occupied large farms on which they grazed cattle for export to the lucrative British market. Small farmers believed that their living conditions could be improved by the redistribution of this grazing land amongst the rural poor—small farmers and agricultural labourers—and the secret society supported their struggle for a more just division of land. Members of the Galway secret society—then under the leadership of the Craughwell blacksmith Tom Kenny—flocked into the ranks of the Irish Volunteers and provided Mellows with almost 2,000 supporters in the county on the eve of the Rising. Kenny, who was 38 in 1916, was the IRB centre for County Galway but was also an associate of leading republicans in Dublin (John MacBride, Seán MacDiarmuida and Arthur Griffith, for instance), as well as president of the Connacht GAA council.

Photo Caption: Liam Mellows-pictured here (extreme right) with pro- and anti-Treaty commanders on the eve of the Civil War on 8 May 1922