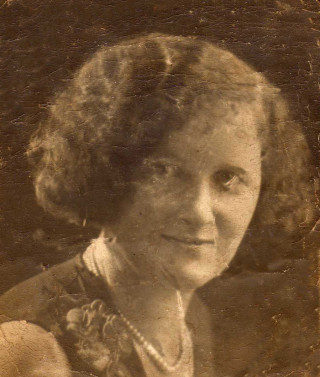 My maternal grandmother was born on 10th August 1909 in Loughrea. Her family had a butchering business in the town. Her given names were Mary Theresa, but she was always known as Cissie. Her mother died when she was quite young, so her father and her uncles primarily raised her and her brother Syl and sister Nellie. Granny was a fabulous cook and worked in that capacity both in private houses and nursing homes in Galway and in Dublin. She was working in Dublin during the 1932 Eucharistic Congress and often spoke about how spectacular it all was. She had a profound faith. Everything that was good, bad or indifferent was invariably put down to ‘the will of God’ – a will that had to be accepted and its consequences were to be dealt with.

Her maiden name was always very important to Granny. Anyone foolish enough to disagree or cross swords with her would promptly be reminded that ‘there was blood in the Lallys, you know’ – generations of ‘ould stock’ who fought and in some cases died for their beliefs. Her father, John, had fought in World War I and by all accounts had returned a traumatised man – hardly surprising, given the horrific conditions we now know most soldiers endured. His brother James emigrated to Boston in 1915 at the age of 20, where he joined the American army. He was killed in action ‘under circumstances of exceptional bravery’ just a few weeks before the armistice, having refused to leave his post as a radio officer in the face of enemy bombardment. Two other brothers, Patrick and Michael, were ‘on the run’ and were subsequently interned following their capture during the course of a visit home to see their dying mother.

On 5th May 1934, the Connacht Tribune reported on a ceili held in Loughrea in support of Cumann na mBan. It noted that ‘Misses C. Lally, Cosmona, and E. Broderick, West Bridge, contributed a vocal duet entitled The Soldiers of Cumann na mBan. That granny could sing was no great surprise to us, she had a beautiful singing voice and loved to sing, but finding out that she had sung as this event was a very proud moment for all the family. Anecdotal evidence suggests that granny assisted those ‘on the run’ and carried messages for her uncles and their comrades. She remained staunchly republican up to her death on 11th July 1994. Thankfully, her death notice appeared in her daily ‘bible’ – The Irish Press,
a paper that was to close shortly thereafter. Cissie Lally, my grandmother, was a feisty, determined, sociable and patriotic woman who never forgot her roots and of whom I am