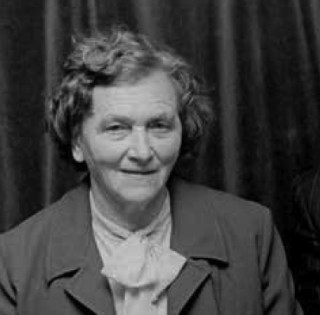 Mai O’Dea, born in Carron, Co. Clare in 1910, was just four years old when her mother died. Her father, being left to rear four small children, sent Mai to her grandparents, in the Garrahy household at Furglan, Ennistymon. The Garrahy family were staunchly republican with two sons actively involved in the IRA’s Mid-Clare Brigade and this undoubtedly influenced Mai, even though she was still a very young girl. She became a member of Cumann na mBan and was actively involved in all aspects of the
organisation’s activities during the War of Independence, which included delivering dispatches, concealing arms and ammunition and looking after men ‘on the run’. Some of Mai’s colleagues in Cumann na mBan in the local area were Marie O‘Dwyer, Maria Conneally and Nora Morgan.

During those troubled years, the Garrahy household was a regular target for raids and attacks by the RIC and Black and Tans. In one such raid, following the Rineen Ambush in September 1920, a number of people, including Mai’s uncles, were seriously wounded and Mai was sent to seek medical assistance. This entailed travelling to Milltown Malbay in the dead of night, a distance of about 10 miles, through a hostile environment to contact Dr Michael Hillery, who arrived the following morning to treat the injured volunteers. Dr Hillery was the father of Dr Patrick Hillery who subsequently became Uachtaran na hÉireann. Mai clearly remembered the aftermath of the Rineen Ambush when the town of Ennistymon was burned and in the process many innocent people were assaulted and killed: “the sound of rafters exploding in the burning houses was like rifle shots, and the smell of the burning was all around the district for weeks afterwards”.

Mai also remembered Fr Michael Griffin who served as a curate in Ennistymon from about 1918 to 1920. Fr Griffin, who was a strong republican sympathiser, was a native of Gurteen, Ballinasloe, Co. Galway. In late 1920, he was transferred from Ennistymon to Galway city. Shortly after this, he was abducted and murdered and his body was buried in a bog near Barna.
As well as being involved in the fight for freedom, the Garrahy family were also deeply
rooted in all aspects of Irish culture, including traditional music. On 20th September 1949, at Carron Church, Mai O’Dea married John Fahy, a member of the Old IRA, of Caherduff, Ardrahan, following which she came to live in the Fahy household where she remained for the rest of her life. After John’s death in 1985 she remained on the 70- acre family farm with her son Michael and, when in 1979 he contested the local government elections, she became actively involved in his campaign and assisted with his constituency work.