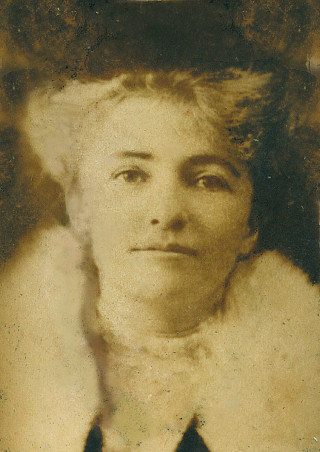 Eva O’Flaherty was born in Lisdonagh House, Caherlistrane; her parents were of the landed gentry and avid Catholic nationalists. Eva was a member of Cumann na mBan in Dublin in 1914, with Louise Gavan Duffy and acted as a courier around the GPO during The Rising. She cycled from the city’s outskirts and bluffed her way past sentries by bursting into tears and claiming to have a sick relative in need.1 Seán McDermott was a particular friend of Eva’s, as were Dr Kathleen Lynn, Linda Kearns, Máire Comerford,
Anita MacMahon, Kathleen Clarke, Colm O’Loughlainn, Dr Mark Ryan, Darrell Figgis, Cardinal Dalton and Fr F.X. Martin.

Such was Eva O’Flaherty’s contribution to the fledgling Irish state that President Éamon de Valera sent Senator Mark Killilea as his government representative to give the oration at her funeral in Donaghpatrick graveyard in April 1963. Her coffin was draped with a tricolour and she received full military honours. Some of those who were present at her funeral, including Brendan Gannon who was from Caherlistrane and retired solicitor Henry Comerford, recalled the extent that Senator Killilea extolled Eva’s extensive Cumann na mBan activities.

Eva is considered to have been one of the sixteen couriers known as ‘basket-women’ during the Rising, so called because they carried messages in the baskets of their bikes. They were chosen by Kathleen Clarke and Sorcha McMahon at the behest of Tom Clarke and Sean MacDermott. Through her Limerick family connections Eva knew the Dalys and the Clarkes, and, as a co-founder of Scoil Acla on Achill Island in 1910, she knew Figgis and O’Loughlainn. Eva corresponded with Dr Lynn, Mrs Clarke and Máire Comerford all her life. She studied millinery in Paris at the end of the 19th century, where she knew Countess Markievicz and had a millinery emporium on Sloane Street, London in 1913. Dr Ryan, a
senior London-based IRB man, was her ‘mentor’ and prior to World War I Eva was a well known beauty in the Café Royal, mixing with an eclectic intellectual artistic set, many of whom visited her over the years in Achill. On the island, she operated St Colman’s Knitting Industries for five decades, which provided much needed employment for local women. Her portrait was painted by Marie Howet and Derek Hill. The artist Paul Henry was a lifelong friend and writer Graham Green played cards regularly in her home. Eva was an intriguing mixture of a fashionista and an intellectual with a heightened political awareness, as well as being a cousin of Oscar Wilde and a relation of London Lord Mayor, Boris Johnson. Her former nurse Mary Jo Noonan summed Eva up well. “She was unique, beautiful, witty, good fun and young at heart until the day she died. It was a privilege to look after her. Yeats
was her favourite poet. She liked Seán MacDermott and talked about him and 1916 a lot. She joked about having the ferocious O’Flaherty temper, liked me to read the Oxford Book of Verse to her over breakfast and was a real rebel at heart, in a nice kind of way.”

1. These details were conveyed by Mary Jo Noonan, her private nurse who was with her for the last six months of her life