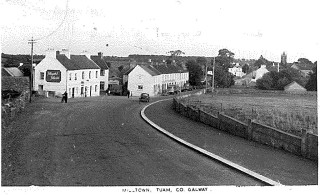 This ambush was carried out in middle of April 1921 by ten to twelve local volunteers during the War of Independence. This event is referred to in popular folk memory as the ‘egg-shed ambush’ because of its occurrence at the site of the old egg shed. It is recounted that two RIC constables returning to the barracks after patrolling the nearby railway station were attacked and wounded.

Where eggs were sorted

The purpose behind the attack was to confiscate the policemen’s rifles and ammunition. However, a number of armed policemen and Black and Tans rushed from the nearby police barracks and managed to retrieve the rifles. The old egg shed was where eggs were sorted and stored for collection by the large egg buyers and is a reminder of a time when the local farming communities traded and bartered eggs as part of their purchase of household provisions.