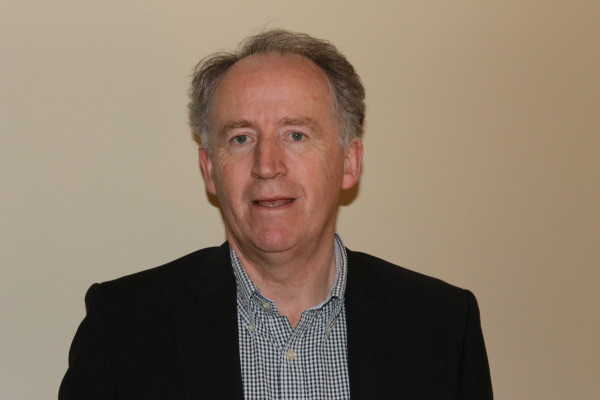 My name is T.J. Carty and I’m from the town land of Mullaghmore South, near Moylough, Co. Galway.

And I’m going talking about something that happened 100 years ago and at the time the Land League was very strong in the country and the landlords who had owned the land for a few hundred years were beginning to decline, there were some of them going bankrupt.

And the English government of the time were beginning to take over some of the estates and divide them amongst the tenants, and several cattle drives, which was where the tenants were organised by the Land League to drive the stock from the land and bring them back to the owners, because most of these estates were rented to third parties, and at the time, these cattle drives were going on, there was one organised in Mullaghmore, it just happened to be on Easter week, the same week that the Rising was taking place in Dublin.

And a Land league would be a peaceful organisation, they weren’t into violence, they wanted peaceful protest and boycotting and all that kinda thing, so the first cattle drive took place on Monday, Easter Monday and the cattle belonged to a Mr. Cooke from Cornfield, in Ballinasloe, which is about fifteen miles away and it was all cattle in this case and the cattle were driven to his home and they were counted out to him and explained to him that the ????? and asked him not to return the cattle to the farm, and their agitation was to try and get the land divided among the tenants, so he agreed and he wished them luck and he took back his stock and it might have ended at that and there mightn’t be any story to it but on the following Saturday, the second cattle drive took place and what happened which turned out to be a totally different story, it was a shorter drive it was only five miles to Killererin and this time there were sheep and involved in it and when they arrived in Killererin, the man that owned the stock, he was a Patrick Fleming, he started a confrontation with them, he was very angry about it and he threatened to shoot them and eventually they counted out the stock to him. They went to the pub, public house for a drink and he went to the R.I.C. barracks, but when he went to the R.I.C. barracks, there was only one officer there and the reason for that was, all the R.I.C. men were being called to Athenry and Moyode Castle and Clarenbridge, where the rebels had attacked the barracks in these places and all the R.I.C. men from other barracks were called in there and he was on his own and he couldn’t do anything about it that day. But seemingly, it was not written down but seemingly, there was a follow up and the men were arrested and there was nineteen of them, charged and brought to court in Dublin. The court took place in June and at the time people were annoyed that the court didn’t take place locally in Tuam or Ballinasloe, but it was in Dublin and the judge sentenced the nineteen men to four months in prison and for some reason which we presume was their age, he allowed fifteen of them out to see how they would get on and four of them when to jail and the four looking at the ages of the men, the four that went to jail were the four older men, the others would have been a lot younger from eighteen into their twenties and early thirties. There was another older man as well but he wasn’t sent to jail but what they did to him was take his stock, to be sold to pay for the court but at the time, the Land League had money and they paid for the court and he got his stock back but the other four men went to jail, and they went to Galway jail and they served nine weeks and my grandfather was one of the four that went to jail. My mother wrote a story about it, she remembered it she was only six at the time, but she remembered how her father was gone one morning and she didn’t know where he was gone but they told her he was gone to town or gone to a fair or something and she didn’t know he was gone to jail. When he was released, she said they went to meet them and he carried her on his shoulders back to the house and she was only six years of age but she still remembered that and she only died a year and a half ago she was 103, but she could remember the story all the time and eventually the land was divided within ten years of that event and all those people who were involved in it, did get land in it which might have happened anyway because the Free State had taken over at that stage.