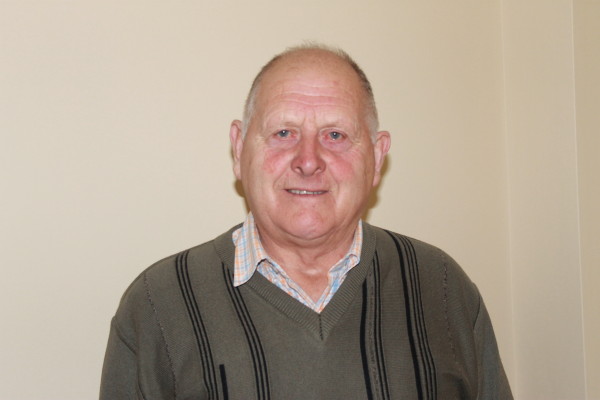 I’m Seamus O’Connell from Claregalway and I am a member of the Claregalway Historical Society.

Leading up to the Rising in 1916, there was a strong Hurling team in the parish of Claregalway and most of them got involved at the time and as they said they dropped their hurleys and they took up arms in that period and Liam Mellows was involved in the organisation of the I.R.A. at the time around Galway, around Athenry, around Claregalway, he got them all involved. Anyhow, during Easter Week it was the Tuesday of Easter Week, it was the day after the Rising in Dublin They were to meet around the Carnmore area, the Claregalway brigade, and Castlegar and Oranmore and I don’t know whether it was a planned ambush or what but members of the R.I.C. came on the scene and a shot was fired and this R.I.C. man by the name of Constable Patrick Whelan was shot dead. After that members of the I.R.A. they all went to the farmyard in Athenry, where the agricultural college is now and they were there for a number of days hiding out and then they were advised after that to return home which they did.

And there was a reward then offered for the capture of one of their leaders and that was Tom Ruane, he was one of the leaders and he was on the run, he had to go on the run. There was £1,000 of a reward offered which would have been quiet a large sum in that, a hundred years ago. He went in hiding back in Moycullen, he was there for a while, successfully hiding away, shall we say until his wife, he was a married man at the time and his wife had a letter written to him, but she hadn’t posted it and it was in her bag and the R.I.C. got hold of the bag anyhow and they got the letter with his name and address where is was staying, that’s how he was captured and he was sent to England anyhow, a prison in England for ten months, as far as I know he was released after ten months, but he was still a wanted man I think, and he still “involved” shall we say, because he was the leader. His home place in Carnmore was raided several time as well, down through the years after that and the house was burned at one time, so there was a lot of agitation going on and a lot of stress I’m sure for the Ruane family among others, like you know, and my own granduncle was involved as well, we have his medal on display in the museum at the moment. And Patrick Feeney as well, he was one of the officers from Mullacuttra, he was involved, he emigrated to New Zealand after that, I don’t think he ever returned to Ireland after, he was married out there, and there’s relations out there all the time of this Patrick Feeney. And there was one man who lost a hand, whom I knew, who died that was Charlie Quinn. And Tom Ruane himself, the man we were talking about earlier, owing to hiding out and sleeping out, I suppose in the Irish weather, he developed problems with his health and things settled down in the twenties. He was elected to Galway County Council as a councillor and he chaired the finance committee there, but he died young, he died in 1937, he was only fifty-three years of age, you know, a young man. While he didn’t die during the struggle, he died from his ill health, because of the struggle.

A sad time, a troubled time and I suppose they were looking forward to a better future I suppose.