From the National Folklore Collection 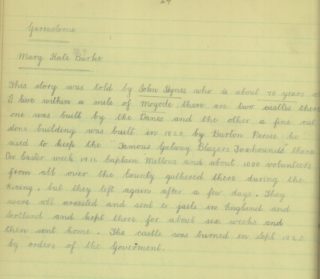 This story was told by John Hynes who is about 70 years old. I live within a mile of Moyode, there are two castles there one was built by the Danes and the other a fine cut stone building was built in 1820 by Burton Persee he used to keep the “Famous Galway Blazers Foxhounds” there. On Easter week 1916 Captain Mellows and about 1000 volunteers from all over the County gathered there during the Rising, but they left again after a few days. They were all arrested and sent to jails in England and Scotland and kept there for about six weeks and then sent home. The castle was burned in Sept 1920 by orders of the Government