You are here: Home>Places>Limepark, Ardrahan

Peter Howley of Limepark, A Volunteer in 1916. 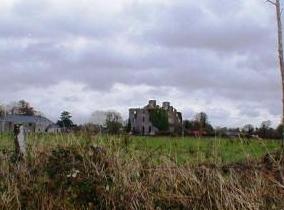 My connection with Rising is my grandfather, Peter Howley of Limepark, was a Volunteer in 1916. He was a Captain of the Adrahan company of Volunteers during that period. Limepark House was chosen as a place to make a stand, as at the time it was unoccupied and it was also very secluded and it was surrounded by thick shrubberies and trees, which would have made it easier to defend, than Moyode.

They reached Limepark depending on reports between 11pm on the Friday and 1am on the Saturday morning. Peter Howley and his brother subsequently lived in Limepark House after the Black and Tans burned them out of their home house in 1920/21 so they moved into Limepark House, my father Patrick was born in the house in 1950, so he remembers growing up in the house to this day. There’s still a thick gorse, shrubbery and trees, they called it the Rock, it’s practically impenetrable so it would have been in 1916, even more so. And so therefore in their view, very easy to defend.

Fr. Fahy and Fr. Farrell had travelled together by motorcycle, I think up and down the column but they had gone ahead and they met the Volunteers at the old gate at Limepark House and at this stage, Fr. Farrell was not in a manic state, but he was very, very concerned for the men, he didn’t want them to make a final stand, which had been the intention, because of the what he had heard happened in Dublin, some of it was erroneous, but they had heard awful things happened in Dublin. So, he met them at the gates and he supposedly cried out to these troops of men, who were walking through at midnight “Lads, ye are going to yer deaths, ye are all going to die”, he was pleading with them, at that point he wanted them to disperse and I think that would have been the view of Fr. Fahy as well.

The company of nearly four hundred men and one woman assembled in the front lawn of Limepark House and it was a moonlit night and my grandfather remembers it being almost like daylight, the moon was so bright. Mellows and his staff repaired into the house, they also had five R.I.C. prisoners with them and they were put in the basement of the house. I think they were prisoners from an attack on Moyvilla R.I.C. Barracks in Oranmore. Mellows and twelve men met in the front room of the house, to discuss what they were going to do, to have a conference. Mellows at that stage had been on his feet for nearly five days and lay down on the floor and he fell asleep, he was just completely worn out.

Fr. Fahy addressed the group, the gathering and he informed them of the destruction and the surrender of the rebels in Dublin and the reports of the treatment of the rebels he had heard. He told them that Ireland hadn’t risen and as far as he knew, Galway were now alone, that they were the only ones left, who still hadn’t surrendered, and a ring of Police and British Soldiers were closing in on them. At the stage, H.M.S. Gloucester had arrived in Galway Bay, the previous day. We now know, they had disembarked at least one hundred men of the Munster Fusiliers to track down the Volunteers, so they were on their tail as it were. After a debate a vote was taken and it went six in five to favour of disbanding the Volunteers. Mellows of course was still asleep, they woke Mellows and the discussion started again and Mellows refused to disband the men, he said I brought these men out and I won’t disband them, another vote was taken and this time it passed ten to two, the two men against disbandment were reported to be Mellows himself and Alf Monaghan. Mellows said I’m not disbanding them, he ceded command and Fr. Fahy went out to address the men, that’s when they remembered that they still had the five R.I.C. prisoners, at this stage they had forgotten about them. The men feared that if these prisoners were released, that they would identify the men involved with the consequences that obviously happened the leaders in Dublin.

Fr. Fahy said; let me talk to them and he went down to the men and he told them of the concerns of the Volunteers, the R.I.C. Constable swore to Fr. Fahy, that if they weren’t harmed, they would not identify anyone involved in the Rising, they would not identify their captures, they would point no finger at anyone and subsequently in questioning by their superiors, the identified nobody, the all have collective amnesia and credit to them for that, they didn’t have to keep their word afterwards but they did.

Fr. Fahy, then went out, he stood in front of, on the steps of Limepark House, the steps up to the front of the house, he stood on the steps and faced the body of men standing in the moonlight, he praised their courage and he said, they had shown that the spirit of Irish men was still alive, I think that is how he put it, but they had drawn a hornets’ nest of military and police and now the only sensible course for them was to disperse, go home, hide their weapons and wait for another day, he said that day must surely some.

My grandfather then, Peter Howley brought Mellows, Alf Monaghan and Frank Hynes down to his father’s house, which was about a mile away, so Peter Howley’s sister, my grandaunt Bridget, she was a member of Cumann na mBan, she prepared a meal for the men and they stayed in the house from about 5am to 7am, at that point then, Peter Howley brought them to Peterswell Cross which was about two miles away and he directed them to a safe house in Ballycahalan, belonging to Patsy Corless, afterwards then, my grandfather he went back to the house after leaving Mellows, Monaghan and Hynes and he was making to go on the run with his brothers, when he reports about sixty R.I.C. pulled up in twelve cars, they were led by the local sergeant, Sergeant Elliott, who my grandfather would have had a number of run in’s with, and they were taken to Gort, then to Renmore Barracks in Galway and then onto the Eglinton R.I.C. Barracks, where they were interrogated. My grandfather was put on a mine sweeper in Galway Bay, on his own with an armed guard, he didn’t see anyone else. He asked if he could speak to his brothers, Michael and William, who had been arrested. His brother Patrick hadn’t been and he was refused. He was taken by mine sweeper to Cobh and then again shipped to Dublin and the reason, that they shipped them was they were afraid if they transported them over land, that they would be ambushed. He was then taken to Richmond Barracks and he met Eamon De Valera in Richmond Barracks, he met De Valera, Thomas Ashe, and he said Noel Lemass. Eamon De Valera and Thomas Ashe called him aside and asked him, ‘Where are you from?’ and he told them, he told them what happened in Galway. He said that De Valera seemed to be pleased that Galway had risen. De Valera told my grandfather not to make friends with anyone that he didn’t know because the Volunteers believed that there were detectives under cover among the Volunteers trying to find out, who was in command and who was important and who was not. He was there until the 9th May. Eamon de Valera and Thomas Ashe were taken for trial, while he was there and he remembers De Valera being taken out and he shook hands with some of the men and he said ‘Be brave men, it’s for a noble cause’. On the 9th of May about four hundred prisoners, along with my grandfather were brought to England by boat, he was then taken to Wandsworth prison in London and he remembers being kept there until about June, then he was transferred to Frongoch in Wales, which is famous because that’s where they stored all the Volunteers, he was released in August, so effectively he was only captive for three months and considering his involvement, he should have been captive an awful lot longer. But it subsequently transpired that they made mistakes with his Christian name, they weren’t sure he was who they thought he was, because he did find out afterwards that his brothers had been interrogated as to what their first names were, so they couldn’t identify which one of them was Peter Howley, so they had to let him go. So, he went on, he remained very, very active until the truce was signed in 1921.